One couple goes on a nighttime excursion to check a very special item off of their life's 'to-do' list: see the Red-Eyed Tree Frog leap from the pages of National Geographic to a real live leaf. 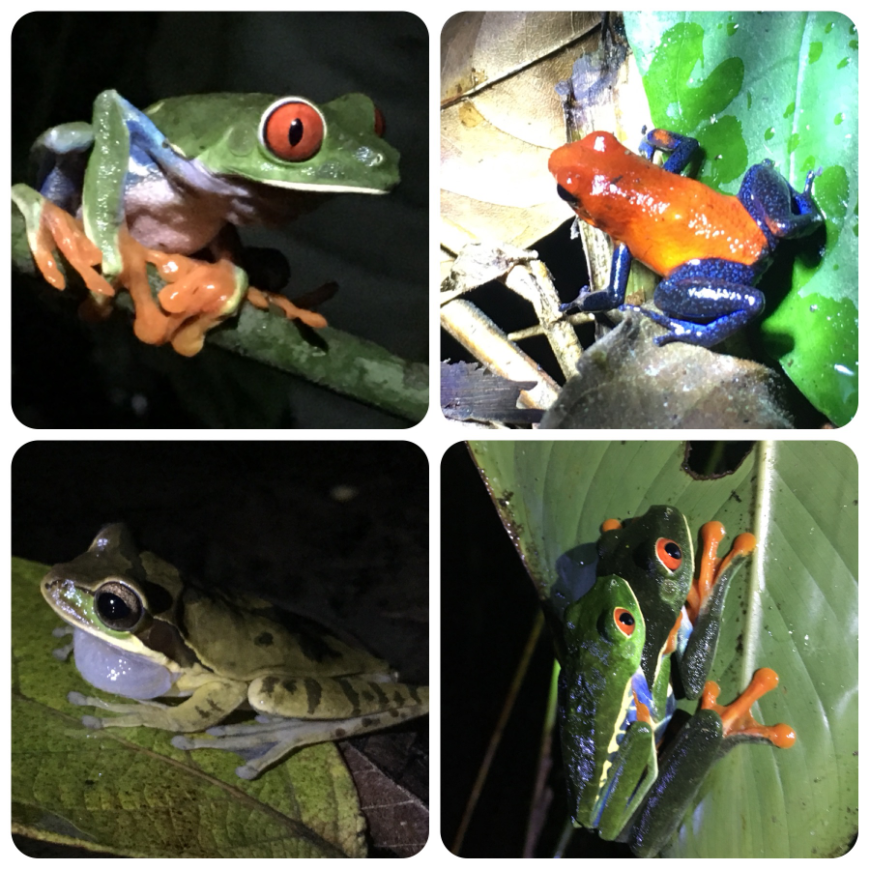 As I climbed out of the minivan at Arenal Oasis, ready to embark upon our “Frog Watching Night Tour,” two things occurred to me. Firstly, it was dark — very dark in fact; secondly, we were not alone... A symphony of insects played their hearts out — demanding my attention and, to be honest, completely stressing me out!

Symphony of The Night 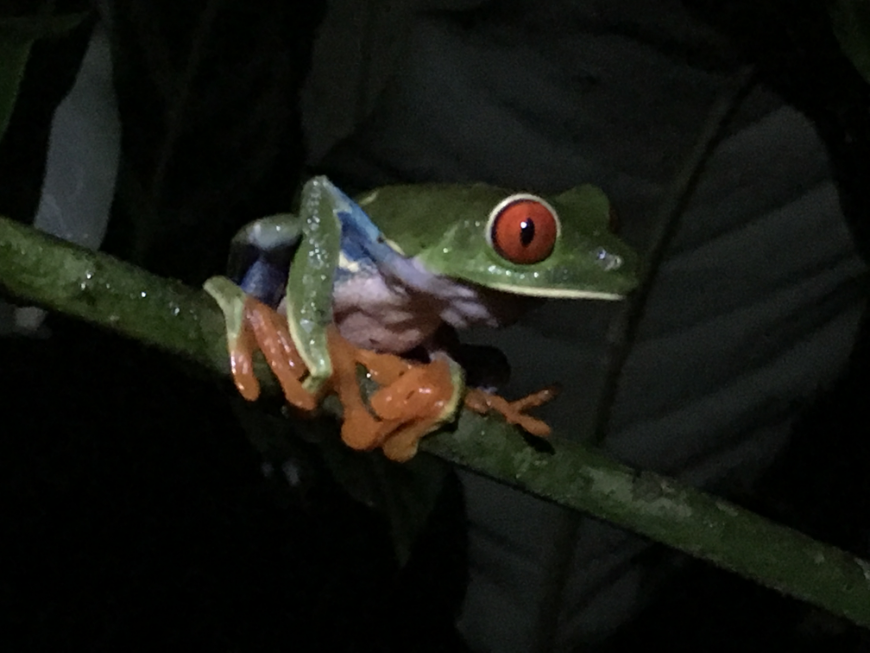 The main frog in our tale—the Red-Eyed Tree Frog—did indeed grace the ladies with an appearance. Photograph courtesy of Claire & Kerry Sanabrias.

Costa Rica has always featured on our “to visit” list, and to see a red-eyed tree frog was one of Kerry’s top priorities. Unbeknown to me, these little beauties are nocturnal. So, it made perfect sense, of course, to go out and see one at night. Arenal Oasis, it seemed would be the perfect spot. I, rather naively, assumed there would be a plethora of nature to “watch.” What I hadn’t realised, an omission on my wife’s part, was that we would in fact be “searching” for frogs, in the dark, with a torch — oh, and that lots of frogs are tiny, smaller than a little finger nail!

As we walked out into the rainforest with Kevin, our guide, I decided first things first — best to batten down the hatches. I pulled up my socks, buttoned my shirt up to my neck, then tucked it firmly into my pants. My bra can easily conceal an iPhone, two (2) credit cards, and a room key, so I was in no doubt a couple of frogs could easily take up residence without me noticing!

Kerry on the other hand, apparently unperturbed by the darkness, cacophony of insect chatter, or the possibility of being eaten alive or bitten to death, was frantically waving her torch about. I knew how much she wanted to see the famous frog, so I decided to muster up some enthusiasm. Now that it had become clear a red-eyed tree frog wasn’t going to materialise without some effort, I tried to overcome the darkness and noise and get spotting.

Can't wait until the end of the article to book your own Arenal Oasis Night Tour? Click here...

The Spirit of Adventure 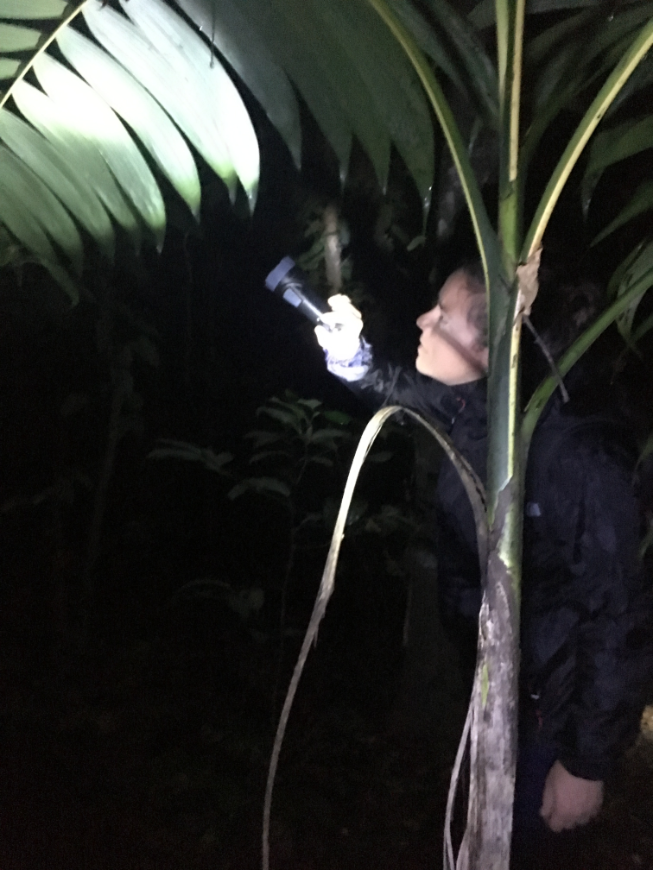 Suddenly, a miracle occurred! It started to rain — well, rain would be an understatement...it absolutely poured down! In the UK, torrential rain would mean “game over,” a probable return to base and a cup of tea, but not in Costa Rica! Out came my humble raincoat, which changed my experience completely! It became my armour — I was zipped up and velcroed in. With my tight elasticated cuffs and a well drawn in hood, I started to enjoy (rather than endure) this unique experience.

Kevin, our guide, was beyond passionate about all things amphibian, insect, and reptile. His childlike enthusiasm was infectious, and I really started to “look” at rather than just “see” an amazing wealth of wildlife I had no idea about. I would consider myself a nature lover, but I hadn’t realised that nocturnal night spotting could be so fascinating. With Kevin’s expert knowledge and keenness to teach, I delighted in the fact that I started to be able to differentiate between the “sounds” of the rainforest. Like an orchestra, all had their part to play, it became less of a discordant racket and more of a harmonious performance.

One of the many highlights of the tour was seeing a “glass frog.” A beyond tiny delight well camouflaged on it’s leaf. As Kevin shone a torch under it’s body, it became apparent that this little “guy” was transparent. Perfectly formed, content in it’s habitat, minding it’s own business and not at all bothered by it’s captive audience... to be able to see these creatures at such close proximity was really special.

So, I’m sure you are wondering, did we get to see the much coveted green eyed tree frog? In a word “yes” and as our American friends would put it, “and then some!” It was about halfway through the tour and I was beginning to think this famous frog was becoming as elusive as a sloth... It was starting to become reminiscent of other “no show” experiences. We spent 12 hours in a jeep, whilst on Safari in India and didn’t see a tiger. We hurtled about in Reykjavik, Iceland in a 4x4 for 3 consecutive nights, did the Northern Lights twinkle? No... not even a glimmer... So Kerry and I are no strangers to the unpredictability and exasperating fact that nature refuses to comply to our demands...

First time going on an adventure vacation in Costa Rica? Prepare to put your mind at ease, here are "Answers to All of Your Concerns About Adventure Trips in Costa Rica" 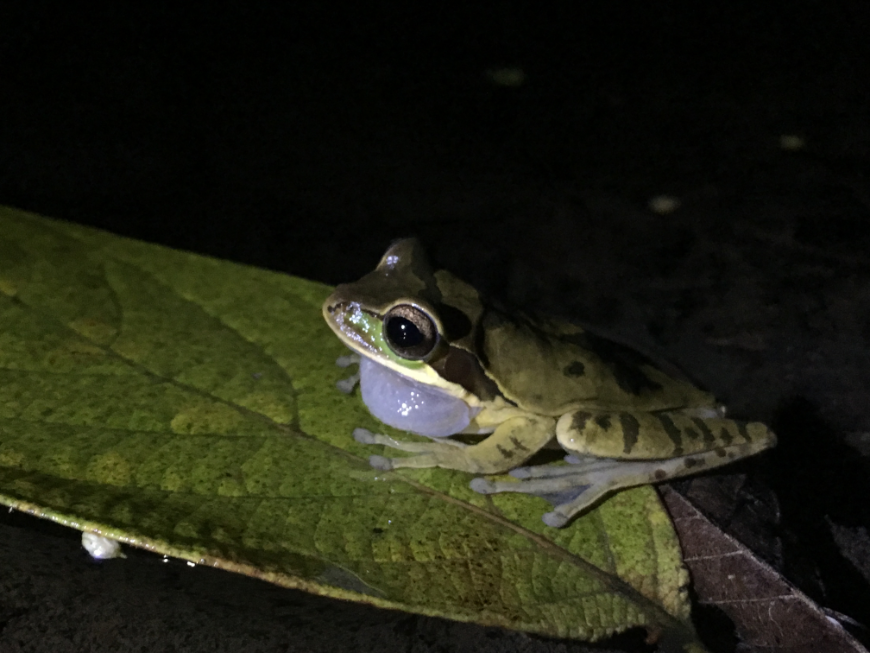 Our first “pair” of red eyed tree frogs could not have been in a better, more prominent position. Conveniently in a state of “amplexus” (a new word and concept to me - meaning not having intercourse, because that’s not what frogs do, but the male fertilising the females eggs) there they were on a huge leaf hanging chest height and practically on our trail! To see these stunning creatures, bright, verdant and very much “alive” was a real treat. We were completely enchanted, Kerry was ecstatic and managed to get some brilliant photos which captured the moment perfectly.

After our first pair, we were on a role and got to see 5 more! At one point Kevin managed to carefully scoop one up so we could really admire this resplendent creature. Looking at how its tiny orange feet gripped on to his thumb, perfectly calm and laid back was a wonderful experience. It felt almost dreamlike, dancing about in lashings of rain in a magical, mystical world. Being surrounded by lush tropical trees and a phenomenal plethora of wildlife, illuminated only by torchlight...

Participating in the frog spotting tour has really opened my eyes as to how much I don’t often really take the time to “look.” Of course, most of us are fortunate enough to “see” but I think experiencing life in the dark, when your senses are on high alert, armed with a torch puts things into perspective. This idea was further enhanced by the fact the creatures we were in search of are so small. I began to consider how often we see the bigger picture but don’t always take the time to pay attention to the smaller details. This also could translate into rejoicing in the big “wow” moments but not taking the time to appreciate and acknowledge those “small” moments of contentment...

Adore vacations where the new friends you make are animals? Here are an assortment of "Wonderful Wildlife Experiences in Central & South America."

I hope you enjoyed reading about our experience in Arenal Oasis, I can’t recommend the frog spotting tour highly enough and coming from someone who isn’t into frogs, this is high praise. We would like to thank Anywhere tours for making the booking process so easy and our fabulous guide Kevin for an being an outstanding, inspirational guide! 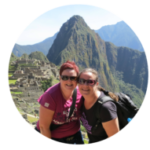 Claire & Kerry Sanabrias are professional globetrotters. Join them on all of their amazing adventures when you travel with them online...