Get ready to take your taste buds on a tour when you enjoy this top ten list of Peruvian foods and drinks you simply must sample.

Peru has one of the most diverse food cultures in the world. Chinese, Japanese, and Spanish food cultures make Peru’s delectable flavors stand out as a global cuisine. With the Pacific Coast, Andes, and the Amazon, Peru has a wide variety of fresh ingredients to inspire Peruvian chefs. Here is a list of delicious dishes and cool beverages to get you started on your gastronomic adventure... 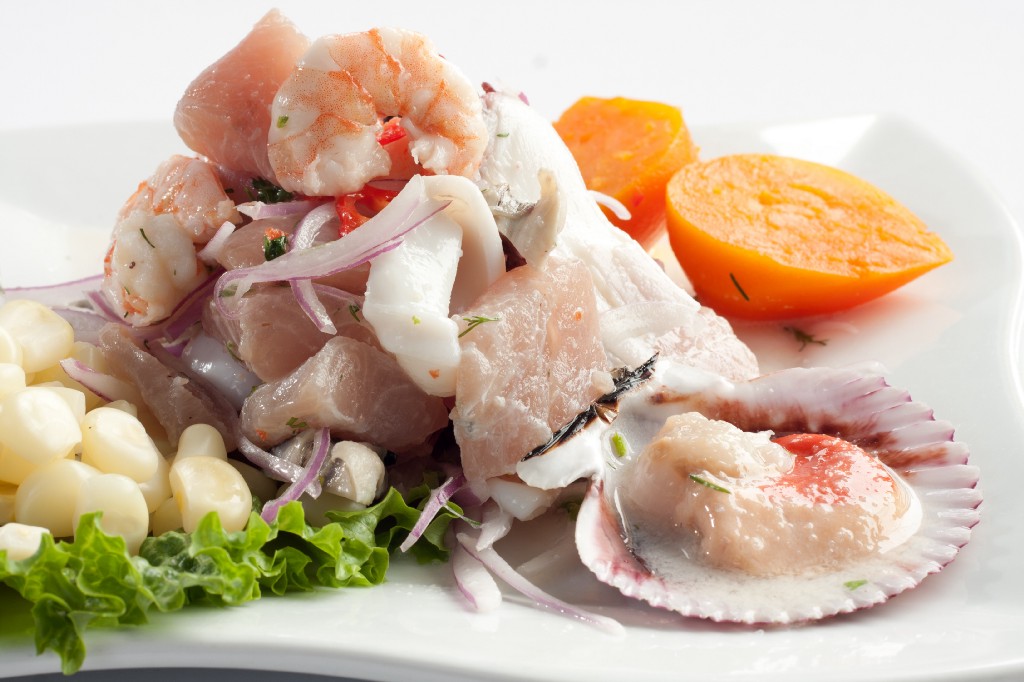 You've likely heard of this delicious dish before. You should definitely make time to sample it during your Peru food tour.

You can find versions of ceviche all over Central and South America, but there are a few details that make Peruvian ceviche especially memorable.

Basic ceviche is made of raw fish marinated in citrus juice. The acidity gives the fish a somewhat firmer texture. In Peru, you’ll find it served alongside sweet potato and plump corn kernels.

Near the coast (especially in Lima), you can try a Japanese version of ceviche called tiraditos. Instead of marinating fish in citrus juice, tiraditos is made of sashimi and a piquant citrus dressing, which the chef adds just before the fish is served. 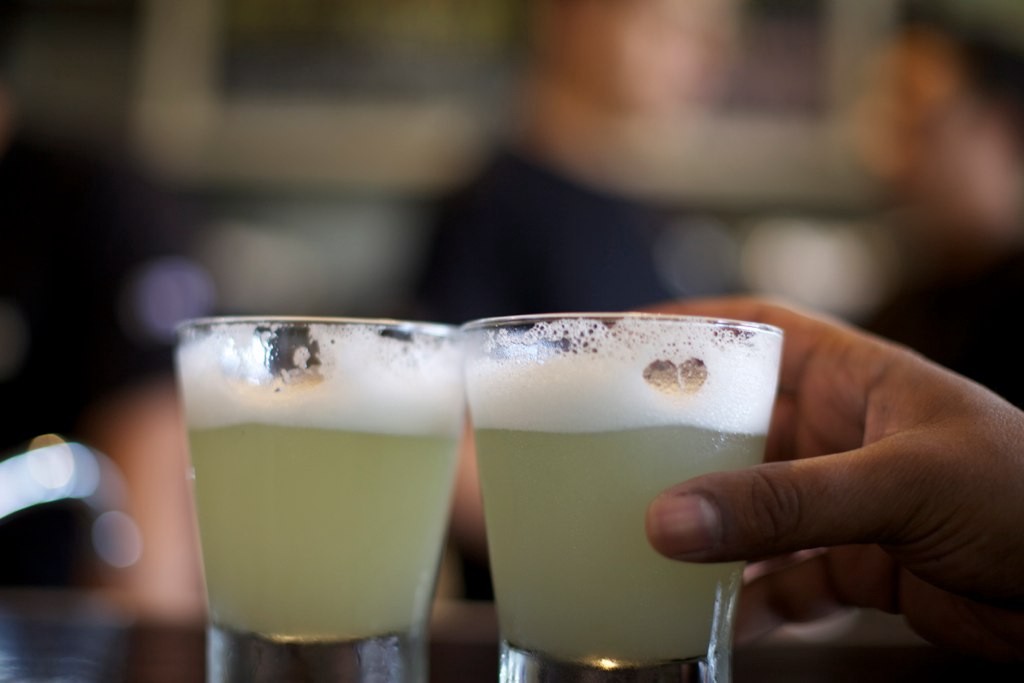 Toast to good times and great memories with a Pisco sour. A Peru food tour isn't complete without a good cocktail!

Pisco is a type of clear brandy made from grapes. It is named for the port city of Pisco, on the arid coast where Peruvian grapes ripen under the hot, desert sun. There are several types of grapes used to make Pisco, and some are especially fragrant. Make sure to appreciate the bouquet before you take your first sip.

Pisco has a sharp taste, so it’s often mixed into a cocktail that balances its strong flavor. Pisco sours combine Pisco with lime juice and simple syrup. That mixture gets topped with a soft cloud of foamy egg whites and aromatic Angostura bitters.

Don't forget to pick up some Pisco and other reminders of your Peruvian adventures! 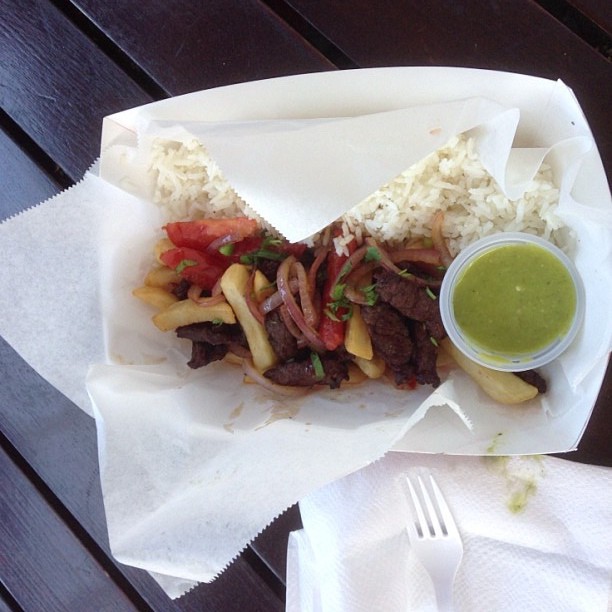 Lomo saltado shows off the Chinese influence on Peruvian food. In this dish, soy sauce and a Peruvian pepper called ají amarillo make a marinade for sirloin steak. Food writers love to site lomo saltado as an example of Peru’s “fusion cuisine.” Chinese immigrants came to Peru to build railroads in the 20th century, and their presence had a lasting impact on Peruvian cuisine.

This dish is served with a scoop of white rice, but you’ll also find french fries mixed in with the savory stir-fry; Peruvians love their potatoes, and the fried exterior of the fries get deliciously shellacked with the lomo’s mouthwatering sauce. 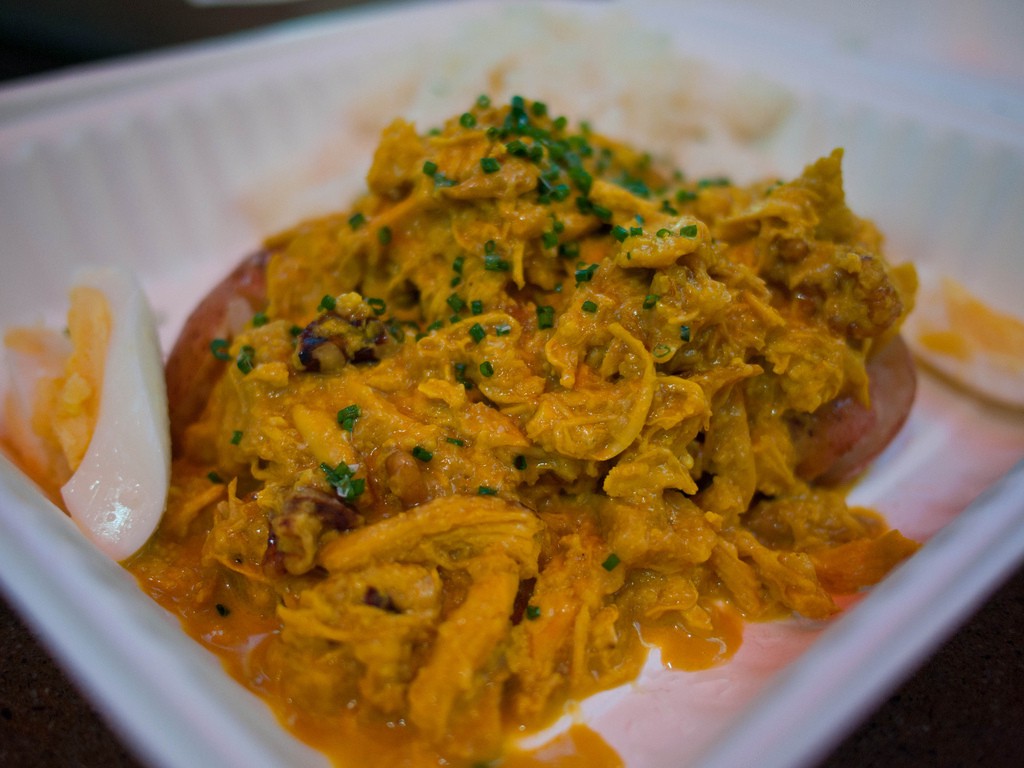 Make sure you sample this creamy chicken dish on your Peru food tour. #Yumm!

Condensed milk makes this dish creamy, while crushed crackers and nuts (usually pecans or walnuts) thicken it up even more. Alongside the chicken, you’ll typically find a boiled yellow potato or some steamy rice, a few slices of hardboiled egg, and sliced olive for garnish. 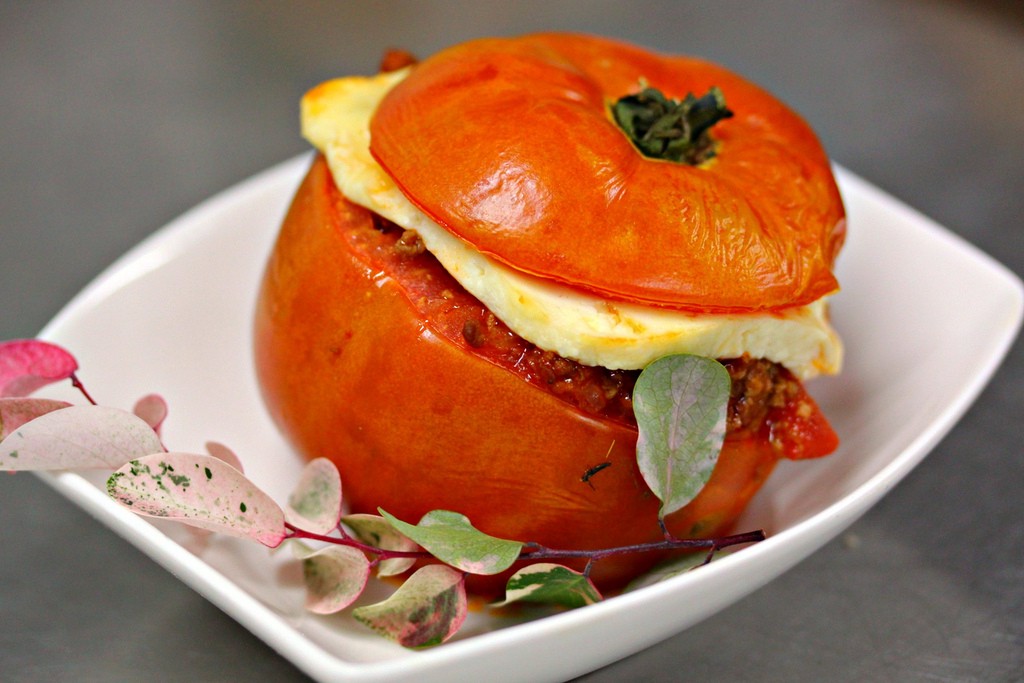 Okay, the presentation of this is lovely!

According to hungry travelers, rocoto relleno put the southern city of Arequipa on the map. Americans might mistake the rocoto peppers for red bell peppers, but these are much spicier. You can find many different variations, but cooks typically stuff the rocoto peppers to the brim with a mixture of raisins, chopped beef, peanuts, and hard-boiled eggs. It all gets topped off with a mild cheese that bubbles over in the oven. 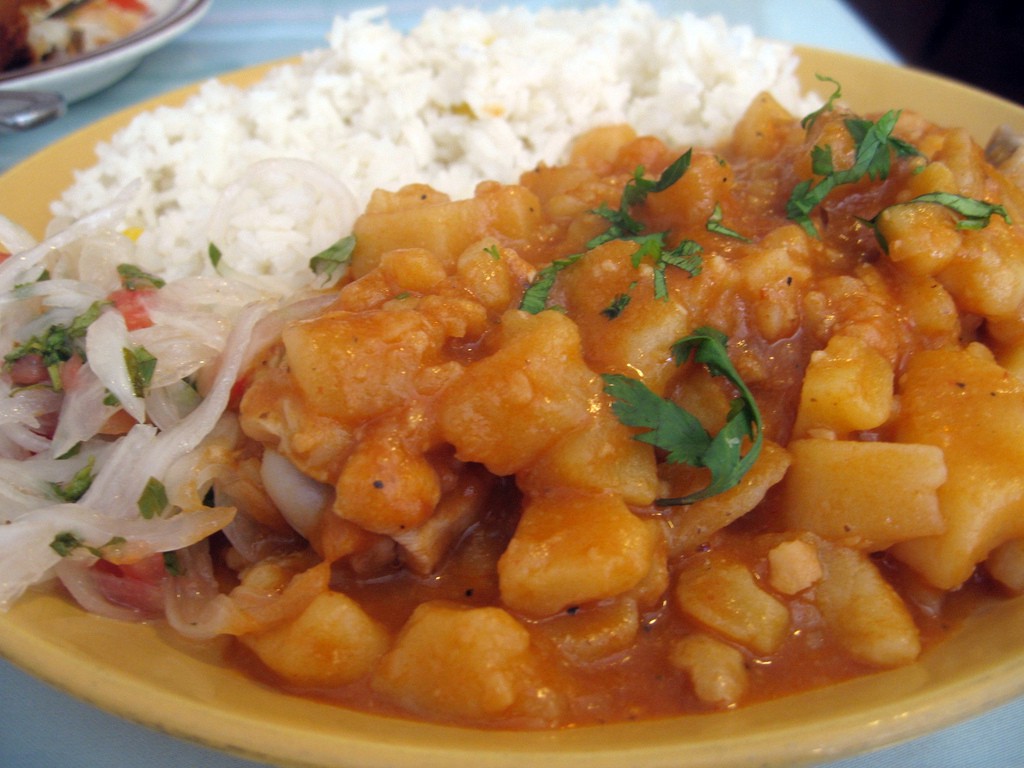 This is clearly a hearty meal; perfect fuel for your Peruvian adventures.

Carapulcra is a stew made with one of Peru’s most specialized ingredients — freeze-dried potatoes. These potatoes, called papas secas or chuños, originated in the cold air of the Andes. Chuños have a concentrated potato flavor that provides a flavorful backdrop for the stew, which is a satisfying combination of pork, chili paste, and peanuts. 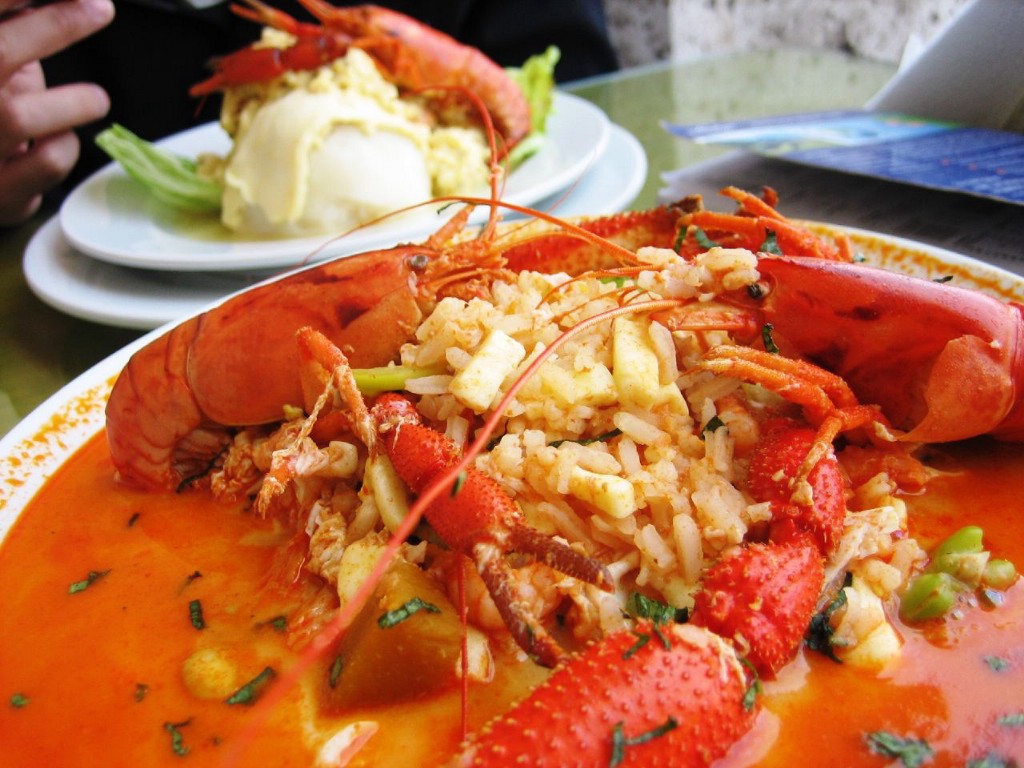 As if the description wasn't delicious enough, the vibrant red colour of this seafood soup is doubly inviting.

Chupe de camarones is a simple shrimp chowder. Order a steaming bowl after you tackle the waves in northern Peru, where the chilly Humboldt Current creates a thriving ecosystem for marine life. Marine life that includes plump, sweet shrimp. Shrimp is typically served whole in this soup — heads and all. Condensed milk makes this dish a little richer, and a chunk of corn on the cob adds to its adventurous texture. 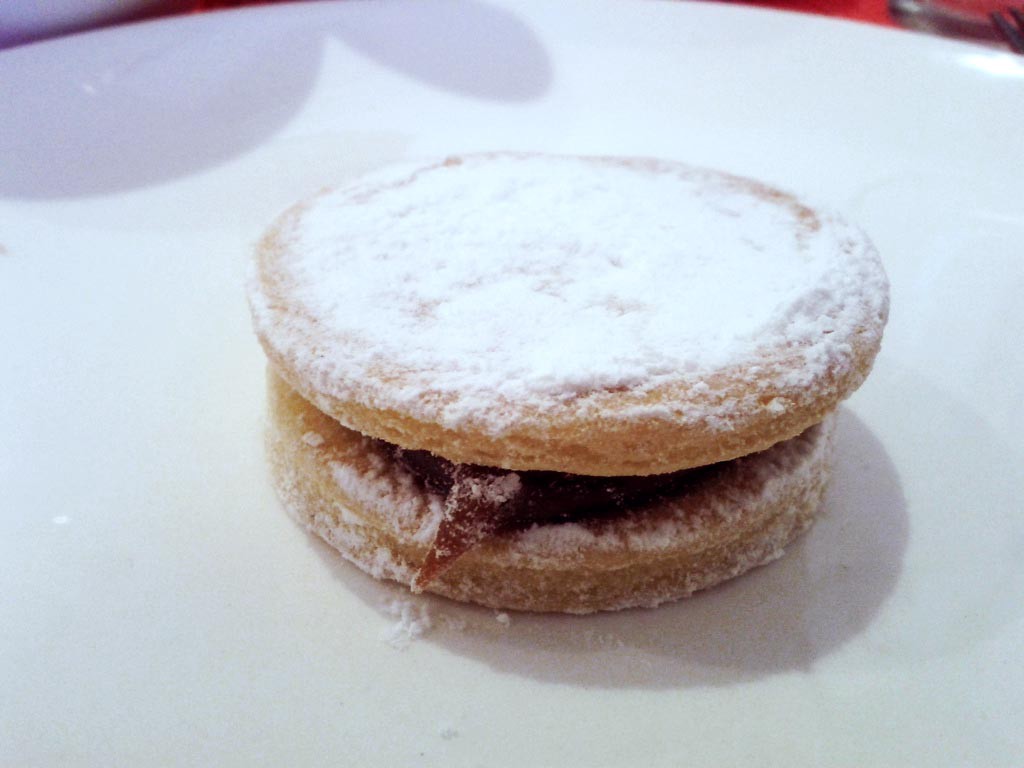 These crumbly sandwich cookies are just the right amount of sweet. The filling is made from condensed milk, which will remind you of dulce de leche. Alfajores are finished off with powdered sugar, and the dainty finished products look at home perched next to a cup of coffee or tea.

You know what else makes an excellent dessert? Chocolate! 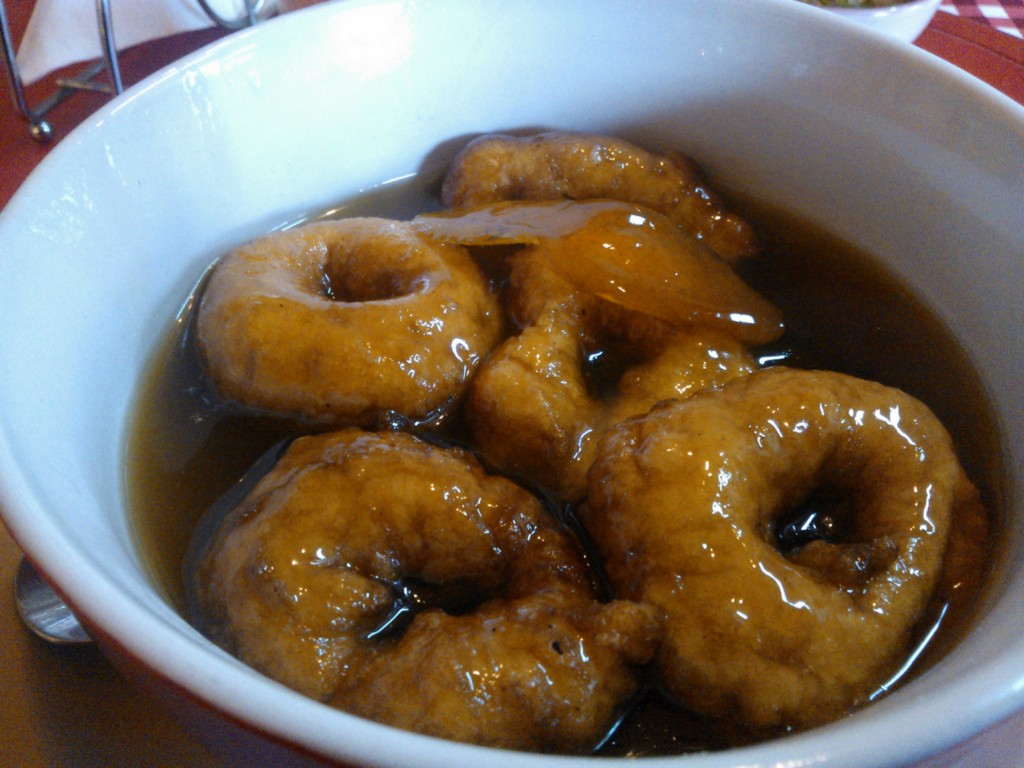 A donut-like sweet potato dessert that's doused in a rich brown raw sugar syrup? What's there not to like?

Picarones have a similar look and preparation as doughnuts. But they come with a dramatic plot twist: picarones get their flavor from sweet potato. The first picarones were fried up by Afro-Peruvians, and you can still find the best versions in Lima’s Afro-Peruvian kitchens. After they come out of the boiling oil, picarones get doused in a syrup made from raw sugar. 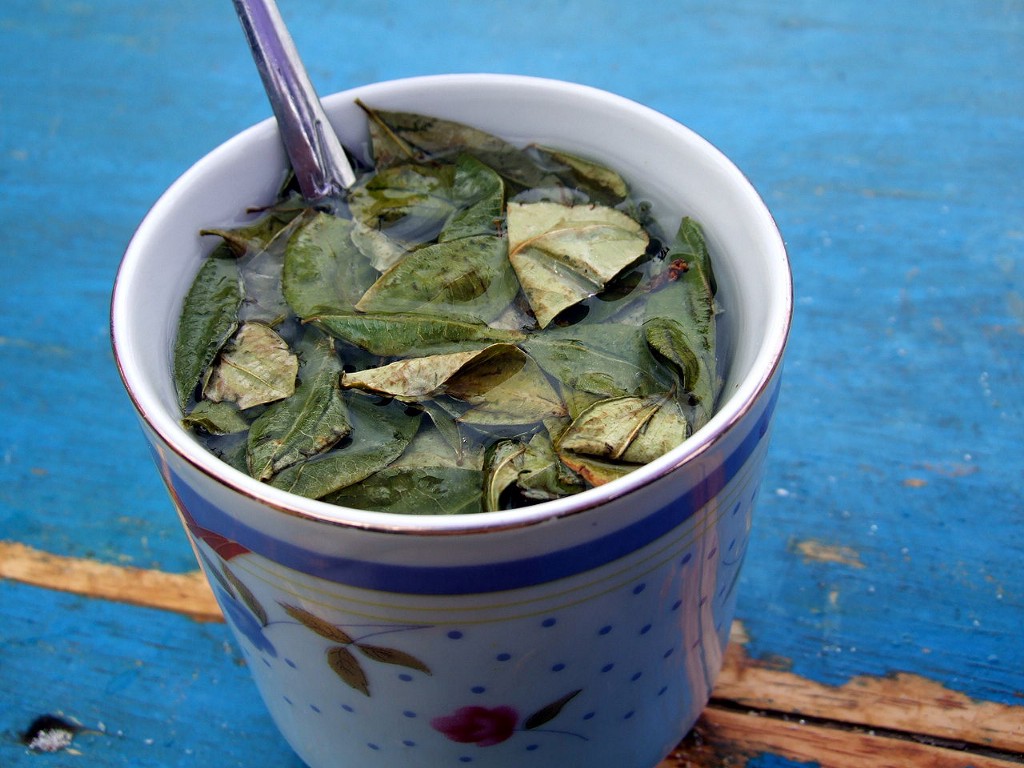 We close out our Peru food tour with one of the country's most renowned beverages, taken for health.

Coca tea is a simple drink made of coca leaves submerged in hot water. It has a mild, earthy flavor. Although coca leaves are the base ingredient in cocaine, the leaves are only mildly stimulating, and they make a drink comparable to caffeinated tea. Anecdotal evidence suggests that this tea helps to lessen the symptoms of altitude sickness, and natives swear by it. Cusco has a staggering elevation of 11,152 feet (3,399 m), and coca tea has helped many a visitor adjust to the thin air.