Once a place of confinement, inhabitants here now run wild and free. Nature has reclaimed her territory. This is the beauty of Coiba National Park. 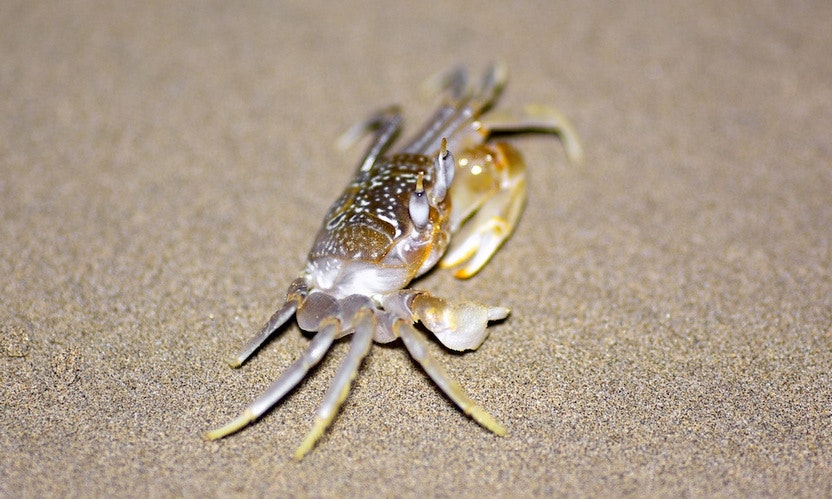 Unlike the original inhabitants of Coiba Island, this little crab roams free.

“Coiba was the place parents would tell their kids the boogie man lived, and if you were bad they’d send you there,” said Ricardo Brado in a 2011 The New York Times piece titled "A Marine Preserve With a Past." Mr. Brado’s quote is understandable—after all, why would anyone want to visit a former prison?

To be fair, one doesn’t generally associate swimming with whale sharks and observing vibrant scarlet macaw parrots with penal colonies. Yet, these are exactly the types of experiences which will leave you breathless at what is now Coiba National Park—38 protected islands and their surrounding waters.

Continue your eco-adventure in Ecuador. Learn the Do's and Dont's of visiting the Galápagos Islands in Part I...

The Dark History of the Penal Colony 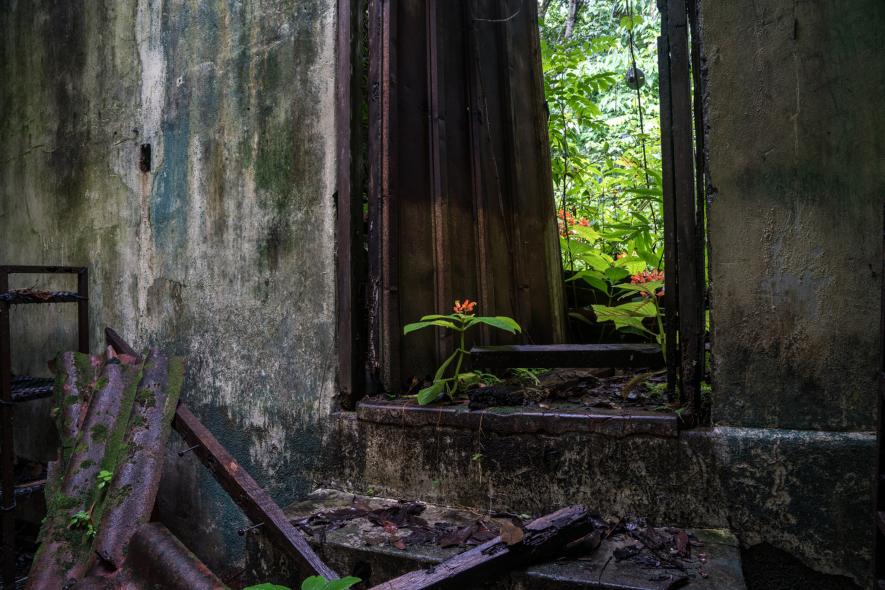 The beauty of Nacional Parque Coiba (Coiba National Park) comes courtesy of the namesake island’s dark roots. The official Coiba National Park website offers an intriguing look into the origins of the penal colony, once known as Panama’s answer to “Devil’s Island.” From its inception in 1919 to its final year of operation in 2004, the severity of its conditions is precisely what led to 80 percent of Isla Coiba’s rainforests remaining virtually untouched.

Prior to becoming a UNESCO World Heritage Site in 2005, this was not a pleasant place to be. The concept of a prison is unsettling enough, but at its peak, Coiba Island Prison was home to 3,000 of Panama’s most dangerous criminals. Further discouraging interlopers? Rumors persis that “Los Desaparacidos” (The Disappeared) met an untimely demise at or around the penal colony under the dictatorial rule of Omar torrijos and Manuel Noriega. This is one of two reasons even fierce criminals feared attempts to flee the island. The other reason? If the politics didn’t get you, the sharks would.

...and in Part II, which includes some can't miss recommendations. 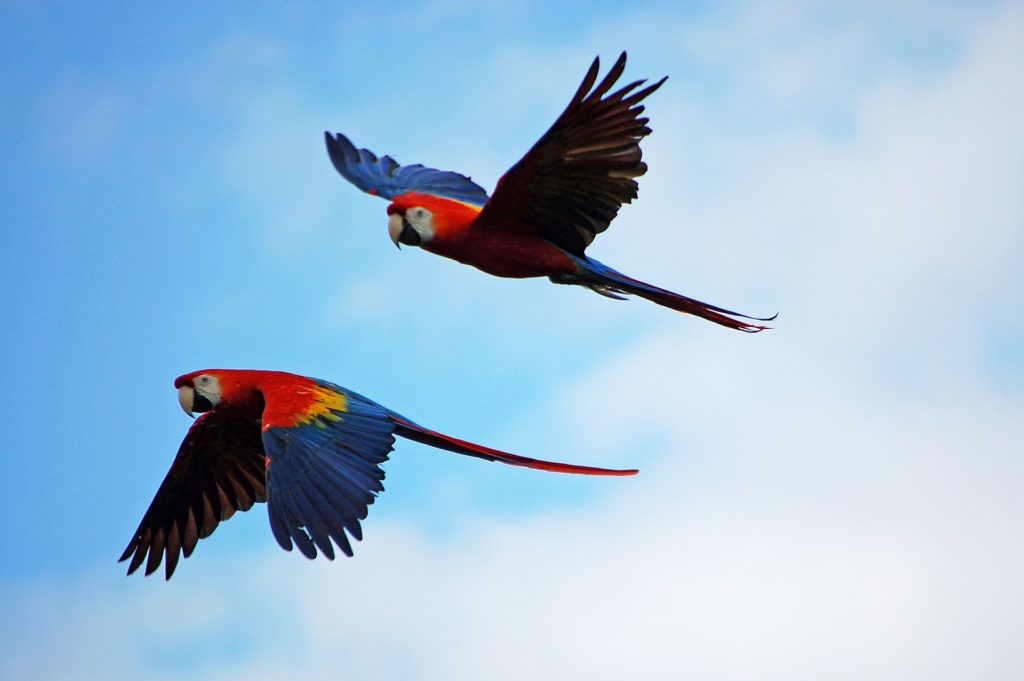 The park is accessible by permit only. There are 430,825 acres (190 square miles/493 square kilometers) of virtually untouched jungles, islands, and waters. Many tourists find it easiest to visit the island by partnering with an approved tour company. Much like Ecuador’s Galápagos Islands, visitors of Isla Coiba are richly rewarded for all of the trouble they may have to go through to access the island—myriad animals are seen prospering in their natural environment.

You may envision scarlet macaws when you think of parrots, but this bird is actually becoming somewhat rare in the wild—a victim of habitat loss and poaching as a source of pet supply. Thankfully, Coiba National Park is one of the places they still have an opportunity to thrive. The park is also home to both howler and white-faced capuchin monkeys. In total, 40 species of mammals and 147 species of birds have been identified. Entomology aficionados (fans of bugs) will also have a field day, as will amphibian and reptile enthusiasts. However, large and dangerous reptiles such as crocodiles, fer-de-lance snakes, and coral snakes also lurk around the island, so be mindful of their presence.

The other side of Coiba National Park’s beauty is its equally diverse surrounding waters. If Isla Coiba’s land is a nature lover’s paradise, then its pristine ocean waters are a diver’s paradise. Manta rays, sea turtles, dolphins, humpback whales, sperm whales, orcas, hammerhead sharks, whitetip reef sharks, tiger sharks, and whale sharks are just some of the impressive larger species which call the island home. Meanwhile, a whopping 760 species of fish have been identified; sports fishing is allowed by permit, but it is catch and release only!

Inspired by Coibal Island, but also saddened by what it once was? These destinations are perfect for reflecting on humanity and life...

A Whale of A Good Time 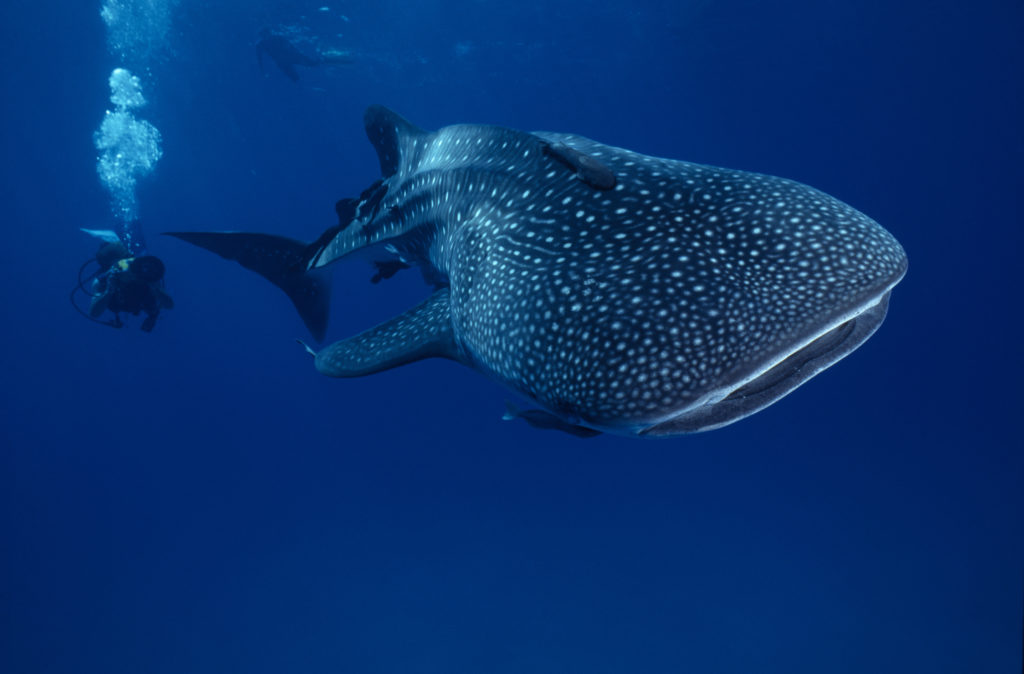 Swimming with a whale shark is an incredible experience, and definitely something you should add to your vacation to-do list.

A place of awe-inspiring and incomparable beauty, any excursion to Coiba National Park is a thrilling experience. For something especially memorable, Anywhere recommends swimming with whale sharks. T_he Encyclopedia Brittanica_ states that the world’s largest living fish can reportedly reach a maximum of 59 feet (18 meters) in length, and even their average length of 39 feet (12 meters) is impressive. Whether you choose to snorkel or scuba dive, swimming beside these gentle giants is an experience you can’t possibly forget.

As filter-feeding sharks, their diet is composed of zooplankton, phytoplankton, mollusks, and fish, which is one of the reasons they are not known for being dangerous to humans (though, like any animal, they will defend themselves if attacked or feeling threatened). Coiba Island’s whale sharks will allow you to swim right beside them; some even take it upon themselves to approach swimmers—as curious of you as you are of them. Despite this seemingly friendly demeanor, it is still necessary to approach these creatures with caution and respect.

Have an incredible adventure when you explore Coiba Island and the rest of Coiba National Park. Photography and videography for personal use are welcome—free and without a permit. The park system knows that the more you fall in love with Coiba and the memories you’ll make, the more you will join them in their mission to protect its environment.