Complete Transit of the Panama Canal

Get ready to experience the Panama Canal as few travelers do. On this tour, you’ll travel through the entire Panama Canal, including its locks and lakes.

The complete transit of the Panama Canal goes from the Pacific to the Atlantic side of the canal. After boarding the ship, you’ll travel towards the Miraflores Locks. These locks will raise your ship 60 feet (18 m) in two steps. The boat then continues on through Miraflores Lake, an artificial body of fresh water, before reaching the Pedro Miguel Locks. Here your boat is again raised through the locks, although this time it’s only 30 feet (9 m) and in one step.

After passing through the Pedro Miguel locks, you will pass under the Centennial Bridge, which crosses the Panama Canal. The bridge was built in 2004 to help supplement the overcrowded Bridge of the Americas.

Next you will make your way through the Gaillard Cut. Although only 8.5 miles (14 km) in length, the Gaillard Cut is carved through the Continental Divide. Its creation was an enormous task, requiring over 9 million kilos of dynamite, 6,000 workers, and six years to complete. The Gaillard Cut connects the Pacific side of the Panama Canal with Lake Gatún and the Atlantic side.

Your boat will then enter Lake Gatún. During the three-hour passage through Lake Gatún, you’ll pass Gamboa and see interesting floating equipment like the floating cranes “Herman the German” and “Hercules.” You’ll also see the jungle and have opportunities to spot wildlife along the shore.

After passing Lake Gatún, you’ll go through the Gatún Locks. These are the final and largest locks in the Panama Canal. They raise your ship 85 feet (26 m) in three steps and are a little more than 1 mile (1.5 km) in length.

On this tour, you’ll experience the Panama Canal in a way that most travelers never do. You’ll enjoy up-close looks at barges, cruise ships, locks and more.

Definitely worth seeing. Unless you experience it on the boat you won't really fully understand the amazing engineering of the canal. However the 12 hour ride was really, really long! Should come up with entertainment, wifi or something that could keep people occupied for those many hours. Also should offer food for sale while we wait for lunch and dessert. I know this part was unavoidable but we had to meet at 4:30 am which was really early

- SOPHIA B, JUL 2017
Get ready to experience the Panama Canal as few travelers do. 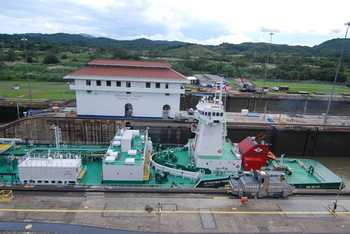 This tour of Panama City and the Panama Canal provides travelers with an excellent look at some of the area’s best attractions.

This tour will take you to some of the most interesting scenery and culture of coastal Panama. At the outset of the tour you will explore the city of Portobelo. Then the tour continues with a road trip to the coast, and a boat ride to Grande Island.

This full-day tour brings visitors to some of the most interesting places around Panama City. You’ll visit Casco Viejo, the Miraflores Locks, the Causeway, and the Biodiversity Museum.