On this tour of Santiago de Chile, you’ll get to see some of the most iconic buildings that define the culture of Chile’s capital city. This tour is equal parts education and experience – along the way, you’ll get to meet locals, taste the food, and hear the music that makes up the fabric of everyday life in Chile.

Your first stop is at the Convent of San Francisco, which was originally built in the 17th century, although the current structure dates back to the 19th century. It’s still home to some of the country’s oldest relics, located in the church’s Museo Colonial. Part of the church was demolished to make way for the Paris London neighborhood, which is your next stop. This is a charming neighborhood that stands out from the rest of the city with its distinctly European architecture, which is reminiscent of the Latin Quarter in Paris.

Next you’ll see the center of Chilean commerce. On a visit to the Old Stock Market Neighborhood, you’ll see the flatiron building that serves as the Santiago Stock Exchange. You’ll also visit the stately La Moneda Palace, which exudes historic importance with its Doric columns and elaborate facade.

The tour continues to Santa Lucia Hill, which looms over the metropolis and offers the most popular view of the city. Staircases make it an easy climb, and fountains, ponds, and flower gardens make the climb especially picturesque. (If you don’t feel like climbing a staircase, there’s also an elevator that can take you most of the way.)

Next, you’ll see two of the city’s most well-known landmarks. The Museum of Fine Arts is known for its impressive architecture as much as its art collection. The museum is located right across from Forest Park, which is one of the city’s most popular green spaces, and is shaded by enormous old trees. You’ll wrap up the architectural appreciation of the city with a stop at the colonial city center, the “Plaza de Armas.”

Finally, you’ll see a bit of daily life at the Central Market, which is in the city’s downtown area. The jumble of stalls are covered by a wrought-iron roof thats adds to the old-world feel of the marketplace. There are a variety of ingredients on display, but you’ll want to especially admire the huge variety of seafood, which is a key component of your next and final stop.

The last stop on the tour takes place at a family-run restaurant for either lunch or dinner, depending on what time of day you take the tour. You’ll dine on fresh seafood and sip on a nice bottle of Chilean wine. As you eat, you’ll enjoy a folk music concert, performed live by locals. This is a great chance to get to know the Chileans who call this incredible metropolis home.

Santiago City Tour Itinerary: (The tour can also be done in the afternoon) 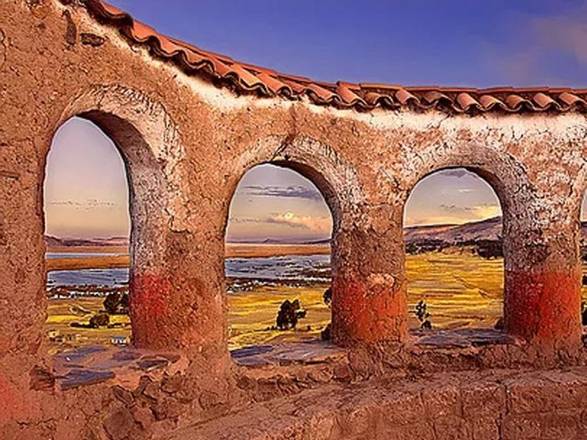 This tour takes you to some lesser-known sites around Lake Titicaca, before crossing over into Bolivia to see the ancient cultural center of Tiahuanaco. You’ll depart at 7:00 am, and break for lunch once you arrive at Tiahuanaco — make sure to eat breakfast before leaving. Also, this tour crosses over into Bolivia, so bring your passport and $160 for the visa fee. Visa needs to be arranged al least 1 day before, and it can get it in Puno City: and you require to show the following: Hotel resevration, airticket, credit card copy, personal photo and itinerary. Visa can be arranged also in your country.