Panamanian food tends to rely heavily on rice, beans, red meat, chicken, pork, and fish. Many vegetables grow poorly in the tropics, so travelers are unlikely to encounter a variety of veggies unless dining at a fancy restaurant.

Yuca and plantains are the most common vegetables in meals. Yuca is a root vegetable that’s typically deep-fried and served in small cubes. Plantains are even more common. Similar to bananas, plantains are served either as platános maduros (ripe plantains) or patacones (green plantains). Most are cut into discs and then fried and pressed. Mixed with salt, pepper, and maybe some salsa, these can be quite tasty.

The people and culture of a country can't help but be reflected in their cuisine, and this is especially true of Panama — a country always ready to serve heaping platefuls of hearty meals to family and friends. Rice and beans are served alongside nearly everything, but are prepared in a variety of ways using different spices and herbs. They are healthy and hearty and a staple of the Panamanian diet. 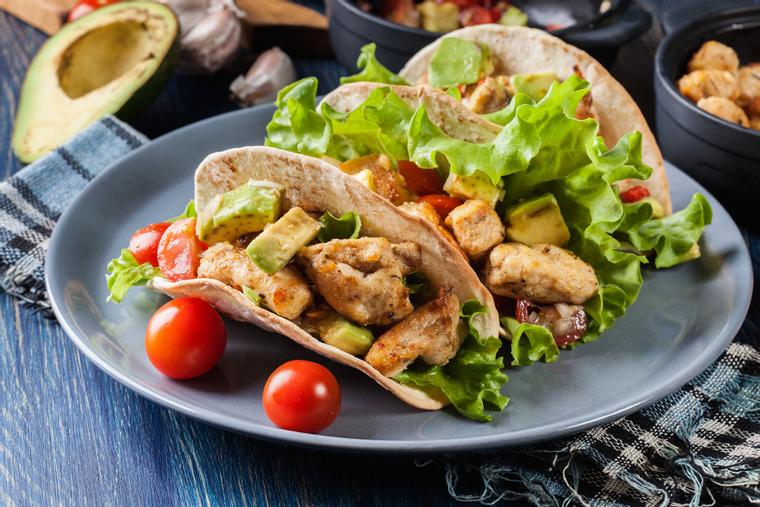 Panama has excellent seafood, a result of its fantastic coastline and a variety of beachside destinations. One of the most common types, corvina, is also one of the best. Corvina is a type of sea bass that’s usually served a la plancha (grilled) or as ceviche (raw and marinated in lime juice). Ceviche of all types – including octopus and shrimp – is very common in Panama. Other seafood includes red snapper (pargo rojo), crab (cangrejo), shrimp (camarones), squid (calamares), octopus (pulpo), and lobster (langosta).

The meat in Panama typically comes in the form of bistec (steak), carne asado (roast meat), pollo (chicken), puerco (pork), or ropa vieja (literally,'old clothes'), which is spicy, shredded beef served over rice. And nearly all Panamanians have a fondness for sancocho, a hearty and spicy stew that’s usually made with chicken and vegetables. 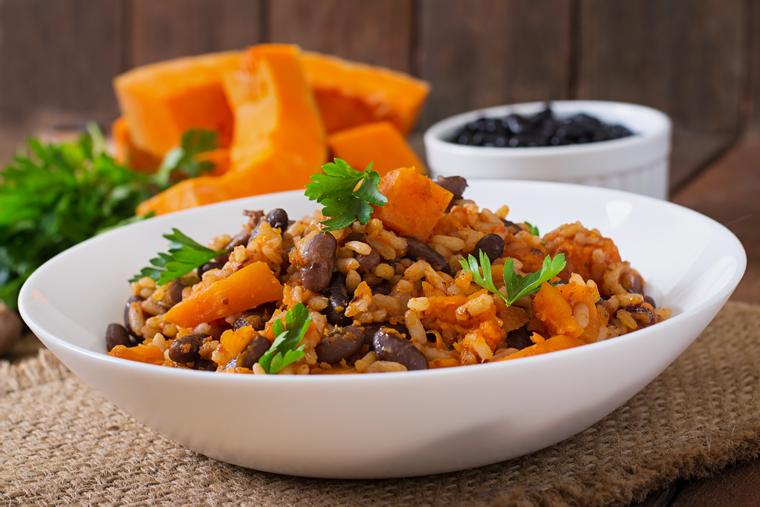 Vegetarians and vegans should have no problem with Panamanian cuisine. Although meat is featured prominently in most meals, rice and beans are staples and can be ordered nearly everywhere. Fruit is also plentiful and includes tropical varieties such as pineapples, papayas, mangoes, melons, and passion fruit. Vegetarians and vegans should note, however, that meatless Panamanian meals can still contain meat products — the soups may be made from a meat stock, and plantains or yuca may be fried in lard. 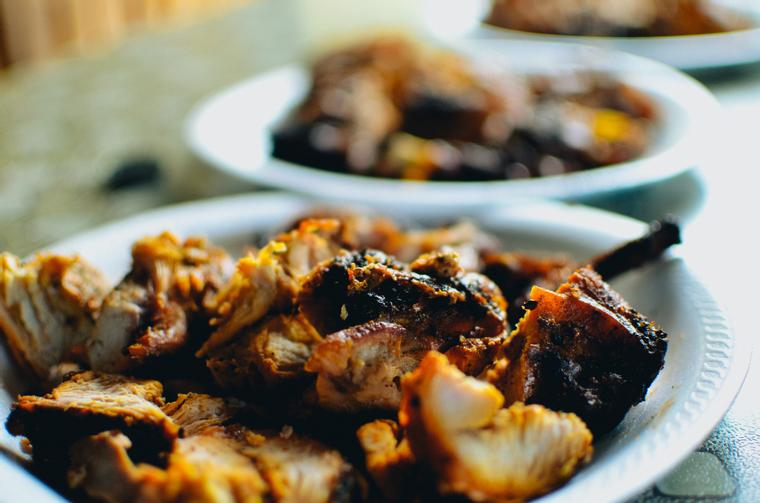 Panama City has all kinds of restaurants and many different types of food. Outside the city, however, country fare takes over and the menu is similar wherever you go. The exception to that rule is the nation's Caribbean region, where the food tends to be spicier and made with coconut milk. Average Panamanian restaurants are known as fondas, hole-in-the-wall places that serve plates of hot, readily made food. Cafeteria settings are also common, and allow you to pick and choose what you want. This kind of meal can cost as little as US$4. 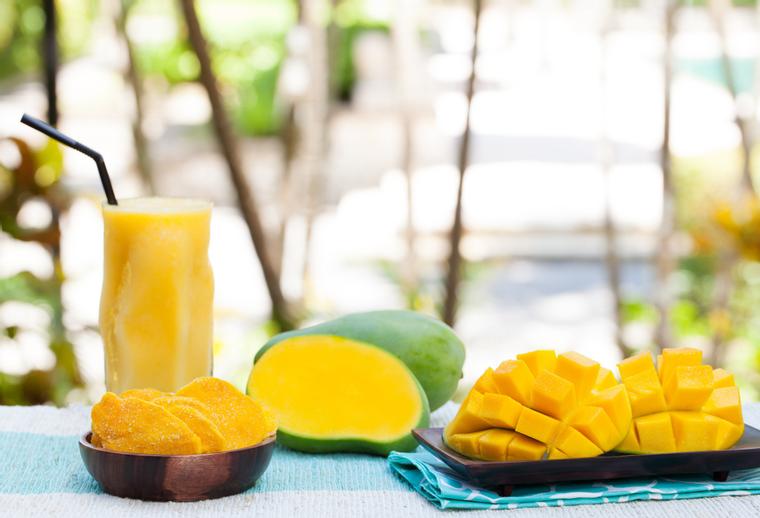 An abundance of tropical fruit translates into an abundance of tropical juice, and it isn’t hard to find fresh, flavorful juice throughout Panama. It’s common for fresh fruit juice to be mixed with sugar and milk or water. Known as a chicha, this type of juice includes flavors such as piña (pineapple), fresa (strawberry), sandía (watermelon), mango (mango), melón (melon), and tamarindo (tamarind). Another national nonalcoholic drink is chicheme, a concoction of milk, sweet corn, vanilla and cinnamon. Coffee is found throughout the country and is quite good. In some places — including Panama City, Boquete, and Bocas del Toro — you can find espresso and cappuccinos.

Panama’s national alcoholic drink is seco. Seco is distilled from sugarcane and is most popular in rural areas, where it’s often mixed with milk. However, beer is without a doubt the nation's most popular alcoholic beverage. There are four local brands — Balboa, Atlas, Soberana and Panamá — as well as a number of Mexican and American brews on hand. The national beers are similar to pilsners or lagers and are fairly inexpensive; imported beer tends to be more costly. Wine in Panama is generally of poor quality and is not widely consumed. Most of it comes from Chile, Spain, Argentina and the US. Nicer bars and restaurants, however, are beginning to stock higher-quality wines. Whether you choose an ice cold fruit drink or an ice cold beer, you'll find both equally refreshing after a day at the beach surfing.

Typical Panamanian food is based around beans, rice, plantains, and meat; including beef, chicken and pork. Seafood is widely available and excellent, and tropical fruit is plentiful. Unfortunately, green veggies don’t grow well down here, and as such there is not an abundance of leafy vegetables. Panamanian breakfasts usually include eggs, meat, tortillas, fruit, and coffee. Lunch and dinner can play off the same theme and involve a type of meat or fish, beans and rice, and vegetables like yuca and plantains. Empanadas are common, as are stir-fried noodles. You may want to try ropa vieja (which literally means old clothes), a shredded beef medley served over rice, or sancocho, a hearty soup made with yuca, chicken and veggies. Arroz con pollo (rice with chicken) is another meal you’ll come across virtually everywhere. These meals are inexpensive and served in small restaurants called fondas that serve fast, hot food.

Does Panama have good seafood?

Yes! In fact, some people theorize that Panama means “abundance of fish” in one of the country’s native tongues. Seafood options are plentiful and easy to come by. Corvina is one of the most common fish and also one of the tastiest. A type of sea bass, corvina is often grilled, fried or served as ceviche. There are other types of ceviche as well, including octopus and shrimp, which are marinated in lime juice, peppers and onions. Other kinds of seafood include red snapper, crab, squid, and prawns. Lobster is offered in some places, but we don’t advise eating it – it is horribly overfished in the waters surrounding Panama.

How much do I tip drivers and other service workers in Panama?

Like tipping in general, this is largely a personal choice and depends on the service rendered. If you feel that the person has been helpful, then tip them. If not, do not feel obligated to tip. However, Panamanians don’t earn huge salaries, so these tips can be an important source of income. For porters or baggage handlers, $0.50 to $2 should do it. For more extensive services – such as for naturalist guides or shuttle drivers – you may want to tip more. Taxi drivers do not expect a tip.

Panamanian desserts are creamy. Pastel de tres leches, or three milk cake, is one of the best. It’s a sweet, rich cake made from regular, evaporated and condensed milk. Another popular option is flan, a light egg custard topped with a caramelized sauce. Batidos are shakes that are blended with fresh tropical fruit, milk and sugar. Panama’s bastidos are delicious and come in a variety of flavors, including strawberry, papaya, and pineapple. Finally, there are raspados, shaved ice snow cones topped with tropical flavorings and a dollop of condensed milk. They are found throughout all of Panama.

How much should I tip after a meal in Panama?

It’s customary to tip ten percent at most restaurants. This can, however, vary depending on where you are. You don’t need to tip street vendors or in cafeterias, but in upscale restaurants you may want to tip slightly more. The choice is yours.

What kinds of alcohol are available in Panama?

Panamanian national beers include Balboa, Panama, Soberana, and Atlas. These beers are light and similar to a lager or pilsner. There are usually Mexican and American beers available as well. Panama’s national alcoholic drink is seco, which is distilled from sugarcane. It’s cheap and potent, so be careful. There is not an abundance of good wine in Panama, although some good options can be found in larger cities and more touristy areas. Most of Panama’s wines come from Argentina, Spain, and Chile.

Is there vegetarian food in Panama?

Yes, but the options are not extensive. In most places, this will mean subsisting on rice, beans, and vegetables like plantains or yuca. Larger cities will have more restaurants and better vegetarian options. Chinese food is also abundant and is an easy, reliable source of meat-free meals.

Is the food the same everywhere in Panama?

Panamanian food is similar in most places. However, there are certain areas where this is not the case, most notably along the Caribbean coast and in areas that cater to tourists. The food in parts of the Caribbean, like Bocas del Toro, is made by Afro-Caribbeans and tends to be spicier than other parts of Panama. Hot sauce and coconut milk are routinely employed here. In areas that see more tourists you are likely to find more diverse food options. International alternatives include Italian, Chinese, French, and German restaurants.