The Galápagos is known for its stunning wildlife, and this tour takes you to some of the best wildlife attractions around San Cristobál. On this all-day tour, you’ll see famous sights like Punta Pitt, Cerro Brujo, and Kicker Rock. Along the way, you'll get to explore he volcanic scenery on hikes and snorkeling excursions. Don't worry about finding a vending machine in the middle of the ocean — snacks and lunch are included.

The tour begins with Rosa Blanca Beach on San Cristóbal, which sits on a small bay with several beaches that are best known for their scenic dunes. On a snorkeling exploration of the area, you might get to see several shark species, rays, and sea turtles.

Next, we set off for Punta Pitt to do some bird watching from the boat. As with many shorelines in the Galápagos, the shore hear is crowded with sea lions. Punta Pitt is the only location in the Galapágos where you can spot all three species of Boobies as well as the two species of frigates that nest here. All three species of booby live in harmony because each has its own territory — the Nazca boobbies nest along the cliffs, while the red-footed boobies live among the bushes that grow near the cliffs, and the blue-footed boobies make their nests farther inland.

After bird watching, you’ll set sail for Sardine Bay to do some more snorkeling. Sardine Bay comprises two beaches, both with crystal clear water that provides a home to all kinds of marine wildlife. Besides the usual rays and sea turtles, you can also expect to see sardines, octopi, lobsters, langoustines, and mullet — to name just a few.

Punta Pucuna’s sandy beach provides the stark contrast to the volcanic landscape just behind the beach, with lava cones rising in the background. This area offers a splendid view of Cerro Brujo and Kicker Rock from a distance. The tour pauses so you have a chance to take some photographs. Then, you’ll continue to explore the islands on a 45-minute hike.

The next leg of the trip bring you two of the most well-known sights around San Cristobál — Cerro Brujo and Kicker Rock. You’ll take a panga ride to boat around a rocky outcrop of Cerro Brujo, which is the remains of a collapsed volcanic tuff. Kicker Rock is another volcanic formation, which first appeared when a sharp spike of lava erupted from below the water’s surface. You’ll notice lots of marine birds perching on the rock before donning your snorkeling gear for an hour-long snorkel.

This snorkeling exploration takes place in the canal next to Kicker Rock. At the opening of the canal, you’ll be in water that’s about 115 feet (35 m) deep and ends at a depth of 39 feet (12 m). While you’re here, you’ll have the chance to see black tip sharks, white tips sharks, Galápagos sharks, hammerhead sharks, eagle rays, sea turtles, and sea lions.

Your tour begins with an unforgettable visit to Kicker Rock. which is located just off the coast of San Cristobal. The main shaft of Kicker Rock juts an impressive 500 feet (152 m) out of the ocean, an explosion of lava from an underwater volcano that’s frozen in time. This is a favorite spot for marine birds and a diverse population of underwater wildlife. To get a better look at this diversity, you’ll go snorkeling in the canal next to Kicker Rock, where you can see black tip sharks, white tip sharks, Galapagos sharks, hammerhead sharks, eagle rays, sea turtles, and sea lions. The depth of the canal varies from 115 feet (35 m) deep to 39 feet (12 m). Next, you’ll visit Cerro Brujo, exploring the borders of this collapsed volcanic cone on a panga ride.

Next up, you’ll continue to Punta Pucuna, a popular fishing spot near San Cristobal. It only takes a short boat ride to reach this small bay’s three beaches. You’ll see Cerro Brujo and Kicker Rock in the distance, so make sure you have your camera ready. While you’re here, you’ll take a 45-minute hike over lava rocks and appreciate more of the view.

After your hike, you’ll make your way to Sardine Bay, which provides a healthy habitat for sardines, octopus, lobsters, langoustines, and mullet. It has two beaches with small white sand dunes that sit next to crystal clear waters — ideal conditions for snorkeling. Take a peek under the waves to meet sea turtles, rays, and sea lions.

The following stop is at one of Galapápagos Islands’ main birdwatching hotspots. At Punta Pitt, you can observe three different species of boobies — blue footed boobies, red-footed boobies, and Nazca boobies — all of which occupy their own little corners of the island. Besides all the birds, you’ll also see plenty of sea lions crowding the shores.

Then, you’ll head back San Cristobal Island to see the bay of Rosa Blanca. This small bay is on the northeast side of the island, just a few minutes from Montones de Arena and Veinte Varas. Rosa Blanca’s main attraction is the big beach that’s surrounded by dunes. Local fishermen come to this area to catch wahoo, butterfish, horse eye jack, mullet and cod. Go snorkeling here to observe shark species, rays, and sea turtles. 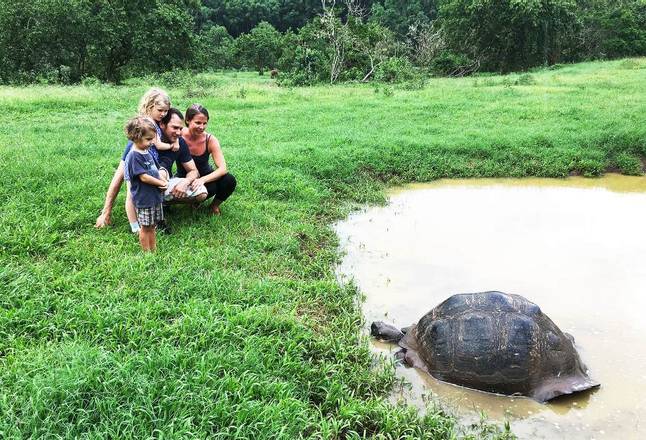 Venture into the highlands of San Cristóbal on this tour. You’ll get to see some of the most interesting plants in the Galápagos and the only freshwater lagoon in the Galápagos. Your guide will provide snorkeling gear for your visits to the beaches.

Located two hours from San Cristóbal, Española is the southernmost island and one of the oldest in the Galápagos archipelago. The island's flat profile is extremely dry with only a few inches of rain per year. Despite the dry climate the island is one of the world's only known nesting sites for the Waved Albatross. 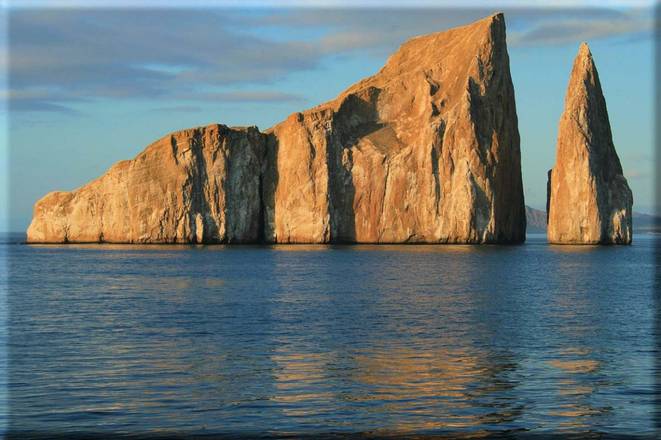 During the boat trip you can enjoy the beautiful landscape and you may see dolphins. Upon arrival at León Dormido we will navigate around the island to see the sea birds and sea lions, resting on the rocks. If you wish, you can snorkel — there is a good chance you will see the Galapagos shark, sea turtles, different types of rays, and a variety of fish. After that, you have some free time to enjoy the beach at Playa Ochoa, Cerro el Brujo or Playa Manglecito. Return to Puerto Baquerizo Moreno.

Based on 686 reviews
Trustpilot
Fantastic Trip to Ecuador!
Percy was incredibly helpful with the planning of our itinerary and our guides Diana and Ricardo were amazing.
Aug 08, 2022
– Natasha L.