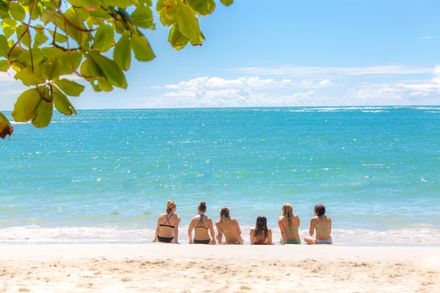 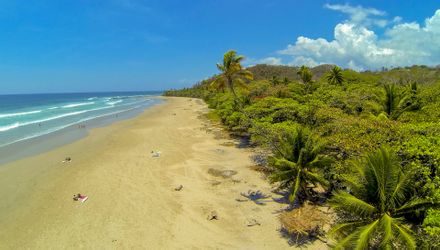 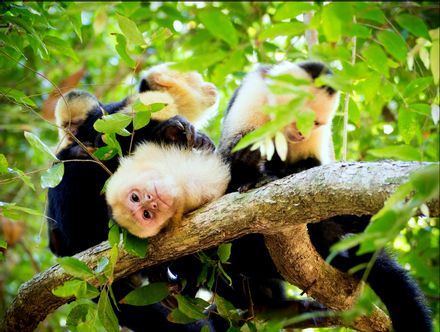 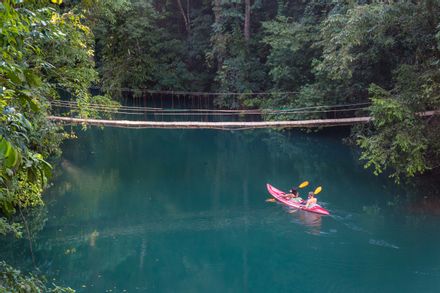 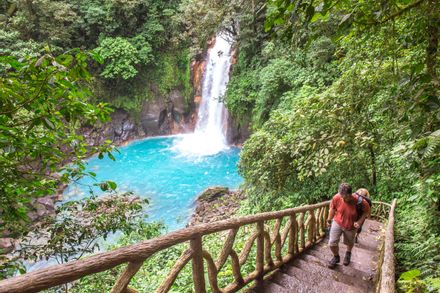 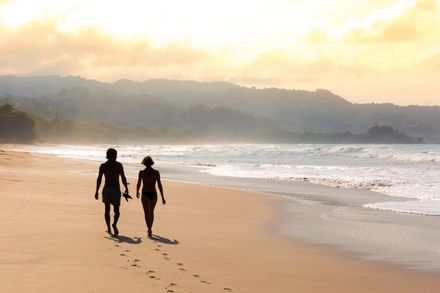 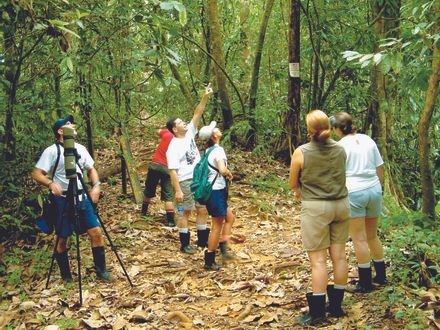 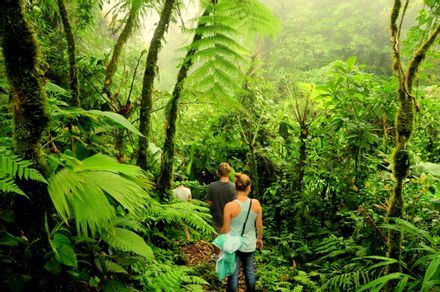 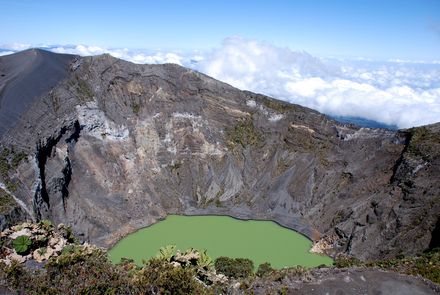 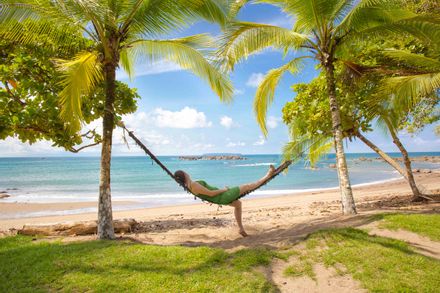 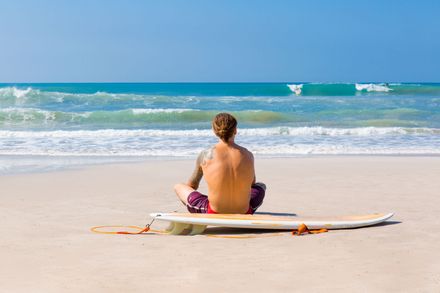 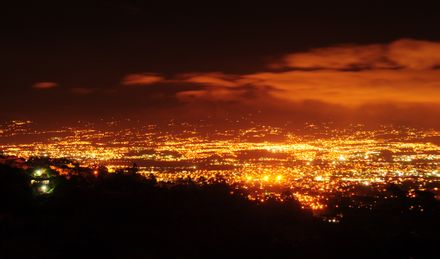 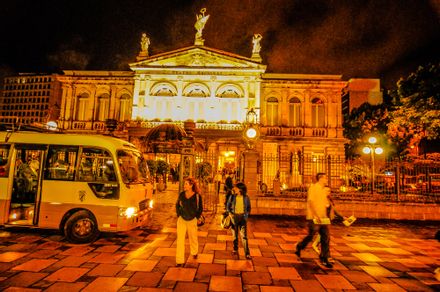 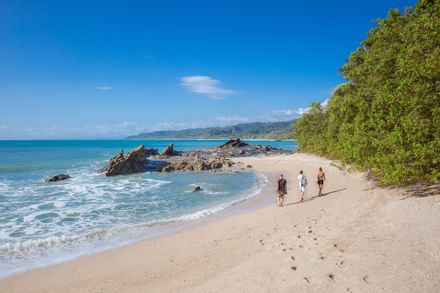 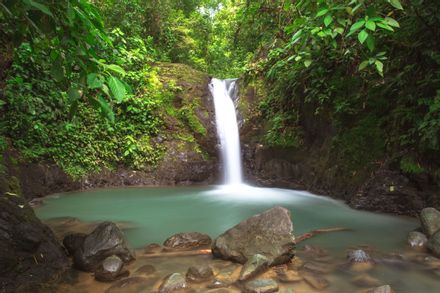 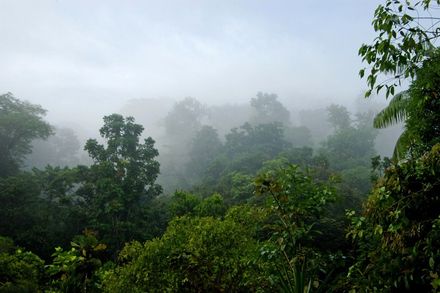 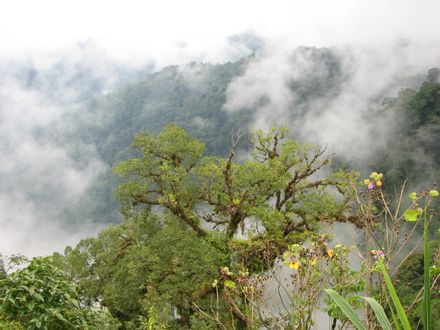 How Much Does it Cost to Visit a National Park or Reserve in Costa Rica?

The entrance fee is usually $11 for most parks and reserves. There are, however, discounts for both students and seniors.

I Want a Nature Vacation. Where Should I Go in Costa Rica?

Anywhere can set you up with fascinating nature tours. Learn about the wide range of Costa Rica’s nature destinations before you decide which environments you most want to visit. You can choose to go on an engrossing trek through the rainforest, sleeping in cabins along the way, or plush hotels nearby national parks.The Osa Peninsula is at the top of many nature enthusiast's must-see lists. In Drake Bay, Caraté, and the Corcovado National Park, you'll find swaths of untouched forests filled with exotic plants and animals. Go to the coast for whale watching and dolphin watching excursions, and follow a guide deep into the inland jungles.

Stay in Monteverde so you can have easy access to several parks, as well as wildlife exhibits where you can see butterflies and bats. Santa Elena Cloud Forest Reserve is less visited than other reserves in Monteverde, and is one of the best places in Costa Rica to see noisy howler monkeys.

Go looking for one of the most sought-after birds at San Gerardo de Dota, where you can easily get to the Los Quetzales National Park. While you’re here you can also visit the Savegre River for boating and fishing. Look for more exotic birds at Boca Tapada, which is one of the few places you can still see the great green macaw in the wild.

In Tortuguero, you'll find no cars, beautiful mangrove canals, and nesting sites for several species of sea turtles. You can also find sea turtles in Marino Bellena National Park, which is near the pristine beaches and plush accommodations of Manuel Antonio.

There’s a lot more to Costa Rican nature vacations than hiking. You can sign up for a rafting tour in the jungles of Puerto Viejo de Sarapiqui, or in the volcanic terrain of Tenorio. Tenorio National Park is also home to the bright blue river of the Río Celeste, and one of the most striking waterfalls in Costa Rica. Arenal’s rainforests are a convenient place to sign up for adventure activities like zip-lining.

Can I Expect to See Wildlife in Costa Rica?

Each region of Costa Rica has an impressive variety of rare wildlife. You can expect to see wildlife no matter where you go.What’s the best way to see wildlife?

Sign up for a nature walk so you can look for wildlife with the help of an expert guide. We recommend going on a nighttime tour of the rainforest — this habitat comes alive after sunset.

You can see a breakdown of Costa Rica’s most interesting species, as well as the national parks where you can find them, on our Species Page.

To see the most wildlife in one place, plan a trek through Corcovado National Park on the Osa Peninsula. This remote, isolated tract of rainforest is completely untouched by humans, and is one of the most biodiverse places on the planet.

Species exhibits are a great way to see hard-to-spot animals like insects and reptiles up close. On hikes through reserves like Barra Honda National Park you have the chance to see exotic species in the wild – some of which don’t live anywhere else in the world.

Take a bird watching tour early in the morning to catch Costa Rica’s exotic species at their most active. Costa Rica has a wealth of ornithology experts — you’ll be amazed by their birdcalls and ability to spot tiny species high up in the tree branches.

Top bird watching spots include the canopies of Arenal National Park and Braulio Carrilio National Park, both of which have tropical forests and volcanic terrain. See one of the most rare bird habitats in the world — a high humidity forest — in the Santa Elena Cloud Forest Reserve. Visit the mountains and national parks of the Nicoya Peninsula for exhilarating hikes with a view of the Pacific coast.

While you're hiking through the cloud forests and rainforests, keep an eye out for Costa Rica's monkeys, including white-faced monkeys, spider monkeys, and howler monkeys.

They’re quite rare, but Costa Rica is also home to some rare feline species, including pumas, jaguarundis, margays, and ocelots. These types of animals live in places like La Selva Biological Station and Corcovado National Park.

With the help of an observant guide, you might even get to see a sloth in its natural habitat — maybe hanging from a tree in the Aviarios del Caribe reserve.

You can find nesting sea turtles along the beaches of Tortuguero and Manuel Antonio. Visit the Gandoca-Manzanillo National Wildlife Refuge to see multiple species of sea turtles on the Caribbean coast.

Sightseers must be accompanied by a guide, and be especially careful not to disrupt the reproductive cycle of these endangered animals.

Ready for an aquatic adventure? Take boating tours near Costa Rica’s beaches to go on dolphin-watching or whale-watching tours and snorkeling trips. You can leave for aquatic tours in Manuel Antonio and Marino Ballena National Park on the Caribbean coast.

To get a better idea of where you may encounter different birds, sea animals, mammals, reptiles, amphibians or invertebrates in Costa Rica, check out our biodiversity page.

What Is So Special About Costa Rica's Biodiversity?

Costa Rica is one of the most biodiverse countries in the world — you can find nearly 5 percent of all known plants and animal species in its national parks and wildlife refuges. Before you venture into the Costa Rican wilderness, look at our overview of Costa Rica’s species. For each animal you'll find a list of national parks where you can see some of these rare animals for yourself.Costa Rica’s biodiversity is attributed to the dramatic shifts in terrain — this tiny country has wetlands, mountains, rivers, and arid plains. You can find many different types of forests here, including tropical dry forests, rainforests, and cloud forests. There are mountain ranges, some of which are studded with volcanoes.

All these different environments make excellent destinations for bird watching tours. Some of Costa Rica’s national parks have bird species that you can see very few places in the world.

While you’re here you’ll see evidence of Costa Rica’s commitment to protecting its wildlife. Deforestation was a major problem in the 20th century, but Anywhere and other organizations in Costa Rica are committed to planting trees and a host of other efforts to offset carbon footprints. Well-maintained parks and knowledgeable guides make it easy to appreciate Costa Rica’s wildlife.

Based on 645 reviews
Trustpilot
A Truly Memorable Vacation!
Erick was instrumental in helping make our vacation to Costa Rica a great one. The excursions were great and all transpo...
Sep 22, 2021
– Rob D.