Coffee has played a pivotal role in the development of Costa Rica. It has shaped social, cultural and political institutions and is still one of country’s major agricultural exports. The story of the grano de oro (golden bean) began in the 18th century and continues to this day. Coffee tours are packed with culture and history, and include visits to the coffee fields, roasters, and cafés. Take one of these tours and you’re guaranteed to learn the ins and outs of coffee production, as well as to enjoy one of the world’s freshest cups of joe. Although coffee plantations are scattered throughout Costa Rica, the highland areas surrounding San Jose and the Tilaran Mountain range that extends to Monteverde are ideal climates for Coffee plantations.

Coffee took root in Costa Rica near the end of the 1700s. The Arabica coffee plant was first grown in Costa Rica’s Central Valley, where ideal growing conditions – including fertile soil, high altitude, and a cool climate – contributed to its success. Cultivation continued and the Costa Rican government soon realized the enormous economic potential of coffee. To encourage production, the government offered free land to coffee farmers in the 19th century. During this time, production skyrocketed.

By 1829, the revenue from coffee exports surpassed tobacco, sugar, and cacao. Coffee was initially exported to Panama and then to Chile, where it was rebranded under the name “Café Chileno de Valparaíso” and sent to England. In the mid-1800s, English captain William Le Lacheur Lyon sent hundreds of bags of Costa Rican coffee to Britain. It fell into the right hands and sparked a national interest in Costa Rican coffee. Indeed, until World War II England was the largest recipient of Costa Rican coffee exports.

The coffee industry created a wealthy upper class of growers and traders. Many had ties with government officials and helped secure the role of coffee in the Costa Rican economy. Although the balance of power during this time was unequal, the revenue from coffee did contribute to the modernization of Costa Rica. It helped build a railroad to the country’s Atlantic coast and construct the National Theater in San José.

Nowadays, Costa Rican coffee is prized as some of the world’s best and is shipped everywhere from Austin to Amsterdam. Costa Rica is the 13th-largest producer of coffee in the world, churning out around 1.5 million bags every year. 90 percent of the coffee is exported, with the revenue accounting for around 11 percent of Costa Rica’s export earnings. Small farmers play a large role in this production—nearly 90 percent of all producers cultivate less than 12 acres (5 ha).

Fair trade coffee is becoming increasingly popular throughout the world. That makes a big difference in places like Costa Rica, which has over 70,000 farmers growing coffee. According to globalexchange.org, around 45,000 of these farmers belong to cooperatives that may be involved with fair trade organizations. Fair trade organizations like Fairtrade International and the Rain Forest Alliance work to secure better rights and salaries for small farmers. Fair trade certification promotes environmental, social and economic sustainability, and often emphasizes shade-grown and organic coffee. Farms that are inspected by Fair Trade labeling organizations must comply with environmental, health and safety regulations.

Cooperatives bring together small farmers to help secure better bargaining prices for their products. There are cooperatives in Santa Elena, Buenavista, Sarapiquí, Tilarán, Montes de Oro, Pilangosta, Llano Bonito, and Coopeldos. Some cooperatives are also part of a secondary cooperative that works on larger scales to improve the standards of living, rainforest reforestation, crop diversification, women’s development, and educational programs in the communities of coffee farmers.

While traveling through Costa Rica, you’ll likely see coffee fields spreading out in green-and-brown mosaics across the hillsides. It’s an attractive, pastoral sight. Most of the country’s coffee is grown in the San José, Alajuela, Puntarenas, Heredia, and Cartago provinces. These provinces have climates that are perfect for growing coffee. In such places, the soil is volcanic, slightly acidic and extremely fertile. The higher elevations – particularly between 3,900 and 5,600 ft. (1,200 and 1,700 m) – have cooler climates that are nicely suited to the needs of coffee plants.

Most coffee berries are handpicked from the plants. The berries are then taken to beneficios (processing plants), where they are washed and removed of pulp. The beans are then dried in the sun or by a machine. Afterwards, beans are sorted according to size and shape and sealed off in bags.

The most classic Costa Rican coffees are mild and softly acidic. They are good afternoon pick-me-ups and pair well with deserts. Growers are currently experimenting with new flavors that are brighter and fruitier. These are less traditional than older varieties, but may find an audience in the international market.

Touring a coffee plantation is a great way to learn about the history and production of this important plant. As you walk through the fields, guides will explain how coffee is grown and harvested. You’ll learn about the de-pulping, drying, and roasting process, and will often be given a fresh cup of coffee at the end. It’s a fun and informative experience. 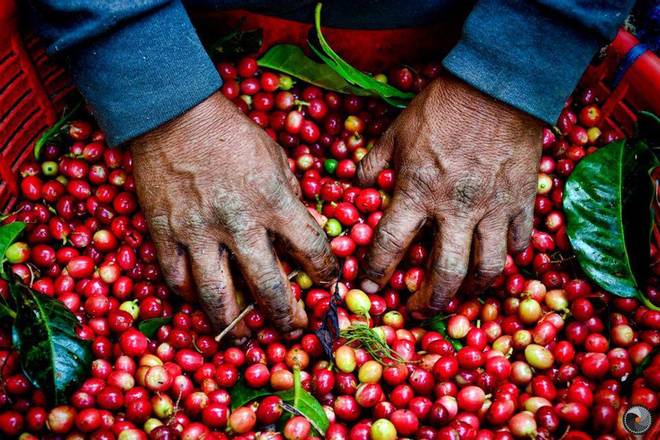 This coffee plantation doesn’t just produce an incredible cup of coffee, it’s also a vitally important part of the community. Learn how family, sustainability, and attention to detail all combine to nurture coffee from cherry, to bean, to brew on this educational tour that’s part local history and part culture. Yes, you will enjoy samples!

This tour will make sure you're fueled for the full-day adventure ahead of you. Spend eight hours in Costa Rica's exquisite central valley of Alajuela, where you'll discover how the perfect cup of Costa Rican coffee is produced at the Doka Coffee Estate, and explore a volcanic region at Poás Volcano National Park. 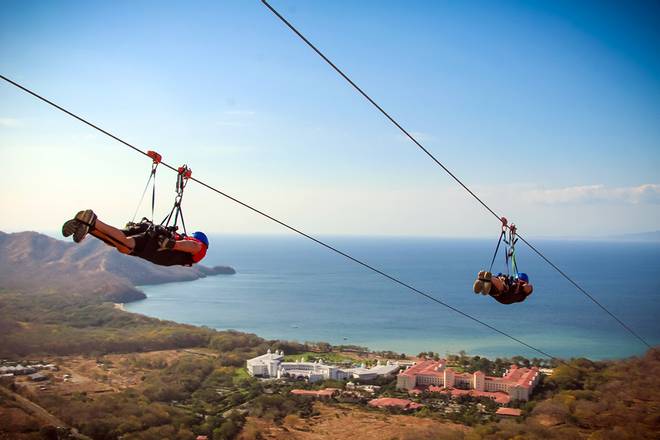 Diamante Eco Adventure Park is an aerial playground in the jungle of Costa Rica. 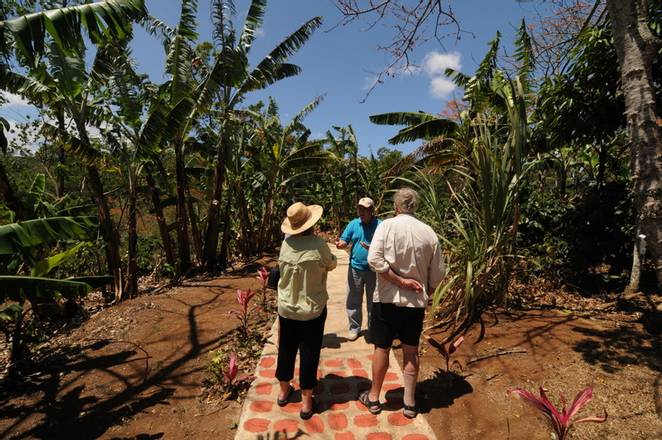 The history and development of Costa Rica has been tied to coffee plantations, and no trip to Costa Rica would be complete without the cultural experience of a coffee tour. Espiritu Santo’s 640 acre high-quality Arabica coffee plantation sits in the picturesque rolling mountains of Naranjo, conveniently located near the handcraft center of Sarchi. From San Jose, it lies in route to many northern destinations including Arenal, Monteverde, and Guanacaste. 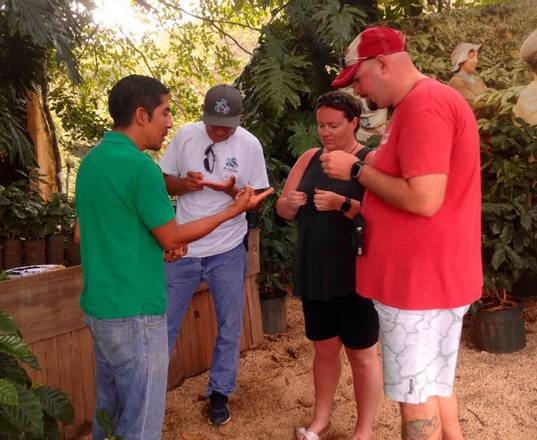 This tour is designed to show you the complete coffee process — from sowing the seeds to the moment the coffee is poured into your cup. The Diría Coffee Tour takes place on the Matambú Reserve, and the tour helps support indigenous Costa Ricans. 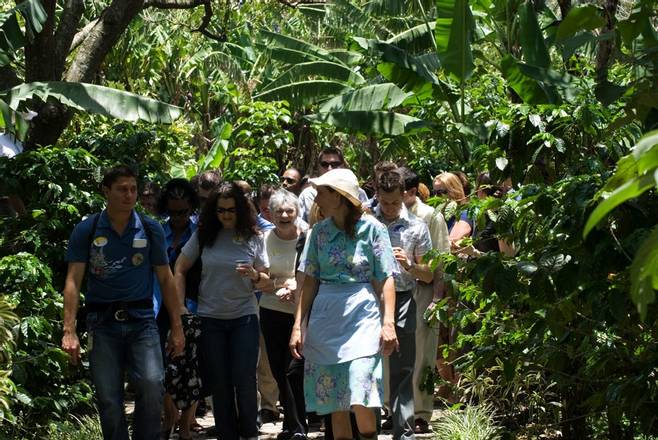 Located in the fertile highlands of Costa Rica's central valley, Café Britt has been running plantation tours since 1991. This tour includes visits to both the coffee plantation and roastery, where you''ll watch workers and learn the art of professional coffee tasting. 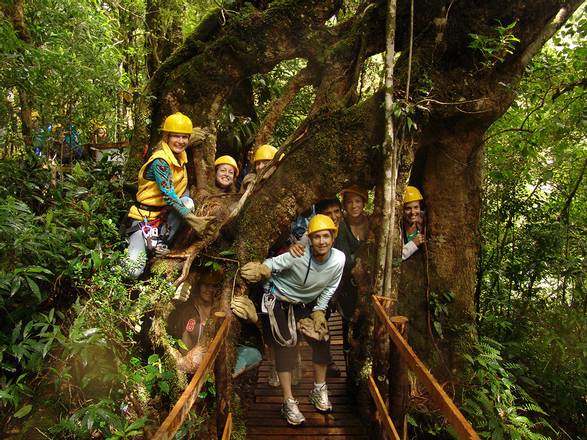 This tour allows you to experience the tropical environment of Heredia, Costa Rica, as well as the bright, rich flavors of its native coffee beans. Café Britt coffee farm is a gourmet coffee farm that strives to offer the finest possible Costa Rican coffee. 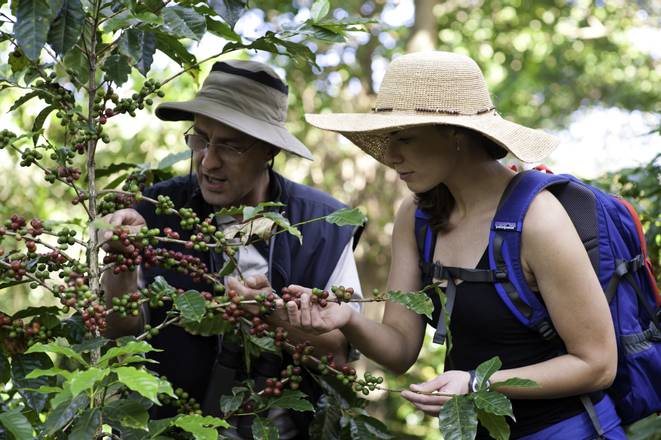 On this tour of Finca Rosa Blanca Plantation, you’ll learn how coffee is made and see an incredible diversity of flora and fauna. The plantation is home to thousands of species of tree and 130 birds species. 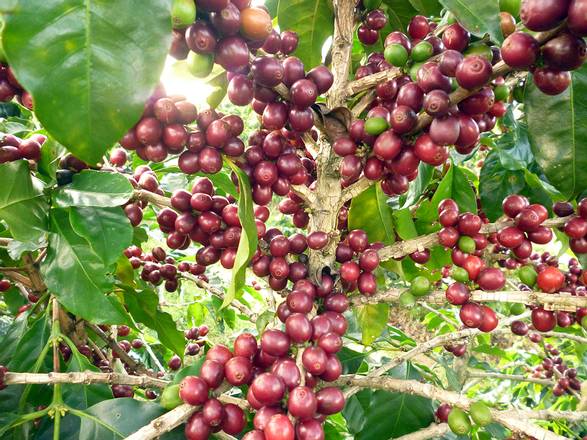 This tour takes you to a coffee farm surrounded by colorful mountains. Along the way you’ll see every stage of the coffee production process, from harvest to cup. 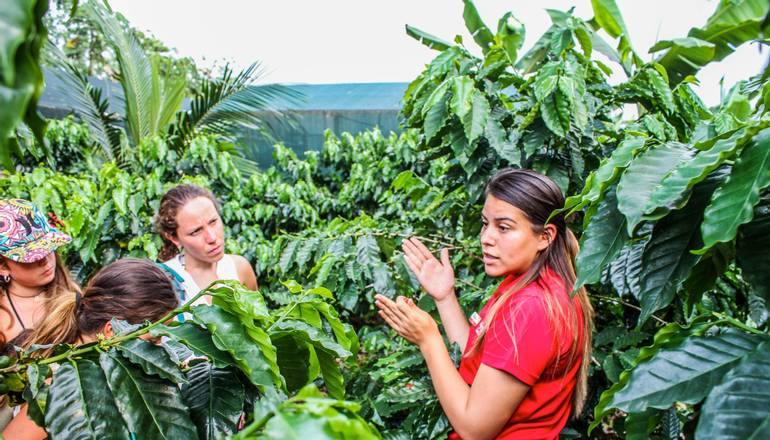 Don Juan Tours provides the history of coffee and chocolate while walking you through how the plant is processed.

Learning something new is such a treat, especially on this tour. Discover the history behind two of the world's most common indulgences — coffee and chocolate. You will get to sample both, but more importantly, you will discover the history and production behind these agricultural staples. Whilst leading up to the tour, consider the fact that technically, neither of these crops is crucial to human survival. Yet, two of the world's luxury crops have become necessities. Can you imagine a world without either of them? 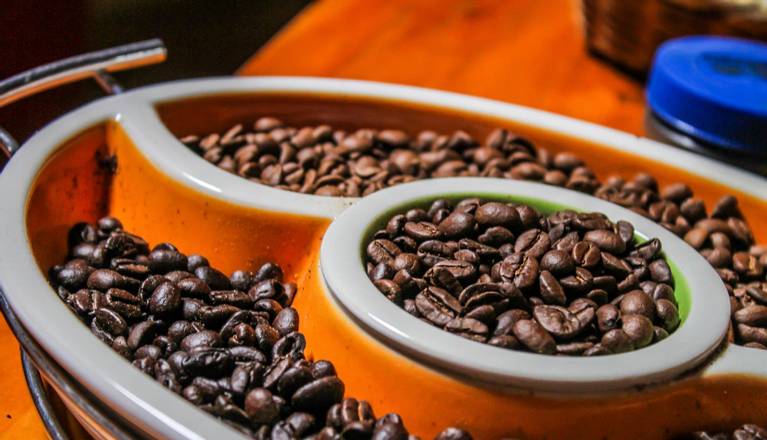 It’s no secret that Costa Rica is famous for coffee. On this tour, you’ll be exposed to the wonderful world of coffee, including its history, tradition and present-day production. You'll also learn about the growing, harvesting, and production of chocolate and sugar cane. 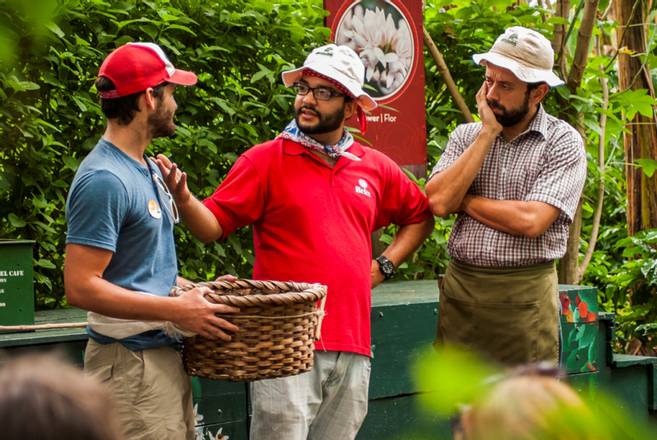 This tour is specifically designed for the serious coffee lover. It includes a tour of the organic farm and an informative coffee tasting. 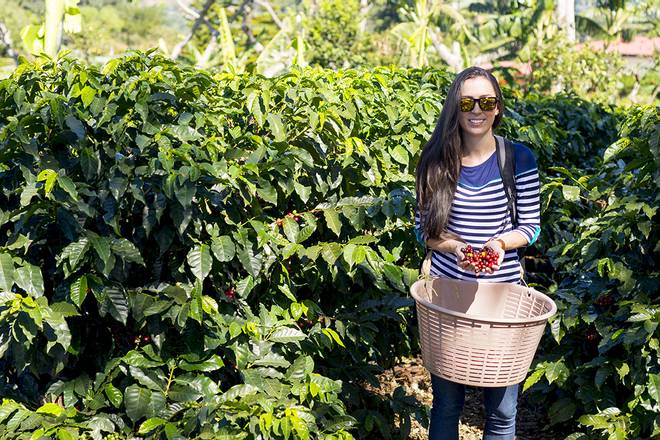 Located along the fertile slopes of the Poás Volcano, Doka Estate has been growing and roasting award-winning coffee for three generations. This tour allows visitors to gain an intimate understanding of how coffee is grown, harvested, processed and produced in both Costa Rica and around the world. 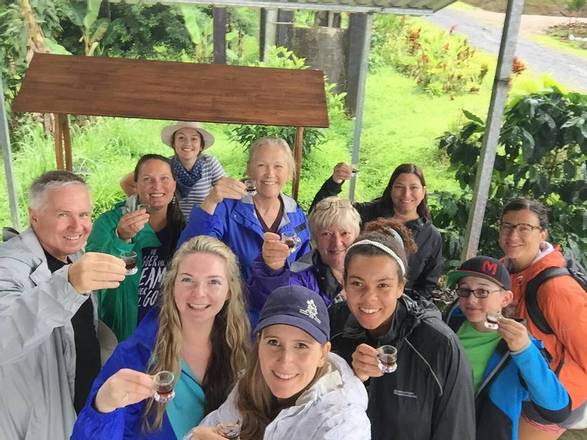 The Sarapiquí River courses through a tropical forest with fertile soil. Coffee thrives in this atmosphere, and on a mini coffee tour you’ll get a quick behind-the-scenes look at local coffee.

Why settle for one adventure when you can go on three? Explore Costa Rica's central valley in beautiful Alajuela. You'll be out all day on this 10 hour adventure which takes you to Poás Volcano National Park, Doka Coffee Estate, and La Paz Waterfall Garden. Outdoor adventure, a treat for the palate, and the beauty of nature — this tour has it all. 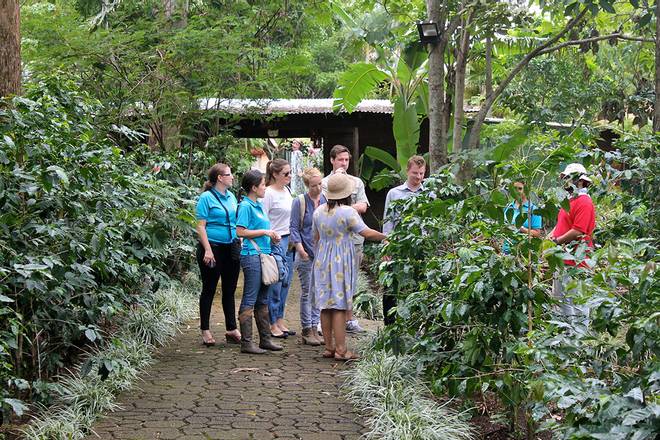 On this tour you’ll get a good look at some of the environment that makes Costa Rica an ecological wonder. First you’ll see the Britt coffee plantation, and learn about Costa Rican coffee. Then you’ll head to La Paz waterfall gardens for an outdoor lunch and an informative look at local flora and fauna. 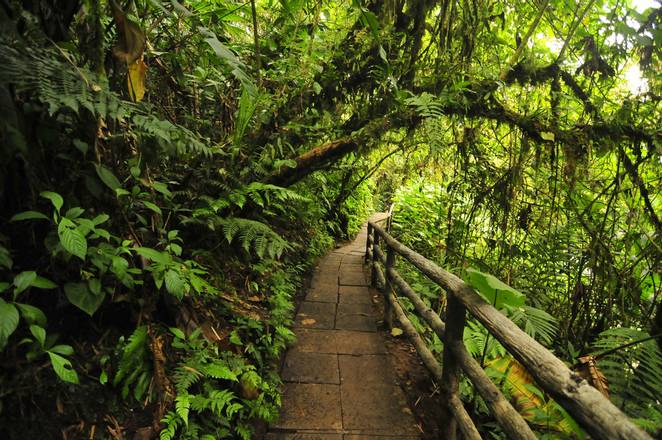 Sleep in before being transported to the La Paz Waterfall Gardens for an all-day tour at one of the best eco parks in Costa Rica. The excursion is designed to start later than most tours so you are rested when you experience what the Waterfall Gardens boasts as the essence of Costa Rica on a guided hike through the reserve.

The Marlin del Rey Catamaran Tour is a great activity for family and friends to enjoy ocean breezes and coastline scenery while sipping delicious tropical drinks. Feel the wind in your hair and bask in the sun while sailing breezily past bays and sandy beaches. 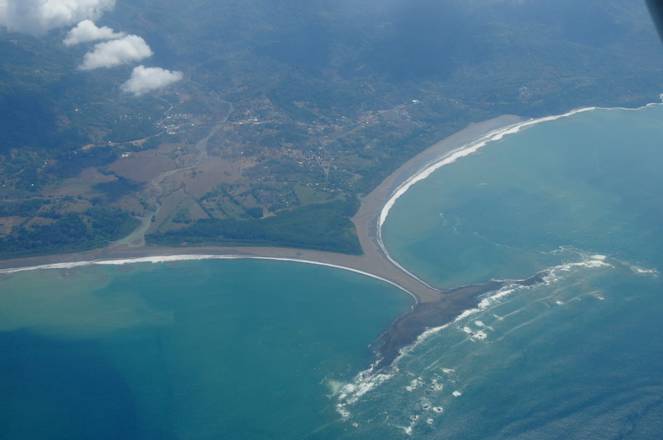 Snorkel amongst the Pacific Ocean's crystal blue waters and spot a colorful array of marine life in the Marino Ballena National Park on this 2 hour tour.

Costa Rica Things to do