The Sport Fishing Manuel Antonio tour offers world class sport fishing for all levels of fisherman. Your boat, all of which come with an experienced captain and mate and are fully equipped with conventional fishing equipment.

If your idea of a great vacation is getting into the record books, you may pull it off in Costa Rica. More than 40 world records have been registered along the central and southern pacific coasts of Costa Rica, including Sailfish, black, blue, and striped Marlin, Yellow Fin Tuna, Wahoo, Snapper, Spanish and Sierra Mackerel, Roosterfish and more.

Marlin:
August through December is peak season, but an occasional blue or black Marlin may be found any month that the water temperature is high. This year, the Marlin bite was incredible from February through March, with some weighing in at over 600 pounds.

Sailfish:
Exceptional fishing from December through April. Often slows from May into early June, then picks up again and begins to peak in August or September.

Yellow Fin Tuna:
Best fishing for the bigger ones corresponds with the marlin and sailfish season, but schools of these fish can almost always be found around Cano Island and further out.

Dorado:
Best runs are traditionally from late May through October.

Wahoo:
Not abundant, but an occasional Wahoo may be caught. The best times are May though October.

Roosterfish:
The region has big Roosters and they can be caught virtually any month of the year, some weighing nearly 100 pounds. Average sizes range from 6 to 30 pounds.

Snook:
Almost all year round, but best from May through August and January though March.

IMPORTANT NOTE: Fishing Licence MUST be purchased upon arrival. 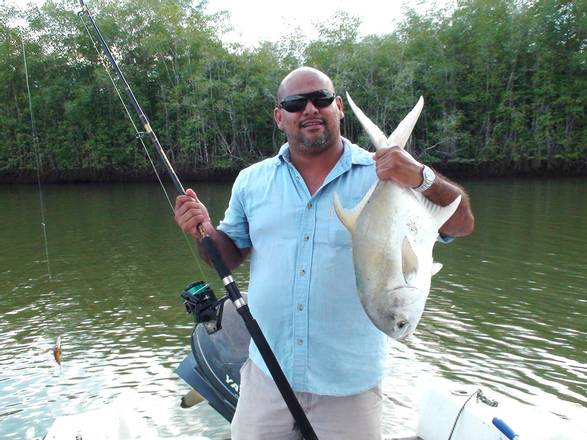 Damas Island is just off the coast of Manual Antonio National Park, and mangrove forest lines Damas Island's coast. For this tour you will board a high-tech motorboat and glide past mangroves, and eventually reach a good place to go fishing.

The Pacific coast of Costa Rica offers world class sport fishing for all ranges of fishermen, including novices and avid fisherman. The beauty and excitement of a day on the Pacific is hard to beat.

Based on 645 reviews
Trustpilot
A Truly Memorable Vacation!
Erick was instrumental in helping make our vacation to Costa Rica a great one. The excursions were great and all transpo...
Sep 22, 2021
– Rob D.